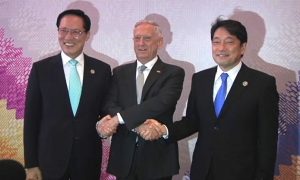 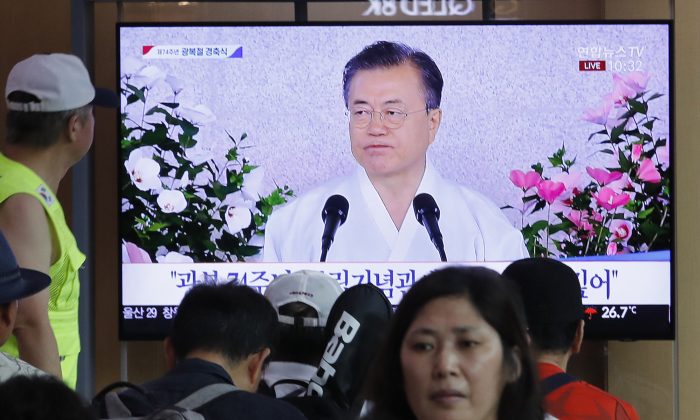 “If a country weaponizes a sector where it has a comparative advantage, the order of peaceful free trade inevitably suffers. A country that accomplished growth first must not kick the ladder away while others are following in its footsteps,” Moon said in reference to Japan.

“If Japan better late than never chooses the path of dialogue and cooperation, we will gladly join hands,” he said.

Moon’s speech at a ceremony marking the 74th anniversary of Korea’s liberation from Japanese rule at the end of World War II came amid heightened public anger and diplomatic fallout over Tokyo’s recent moves to impose trade curbs on South Korea.

Seoul has accused Tokyo of weaponizing trade to target its export-dependent economy and retaliate against South Korean court rulings calling for Japanese companies to offer reparations to South Koreans forced into labor during World War II. Tokyo’s measures struck a nerve in South Korea, where many still harbor resentment over Japan’s ruthless colonial rule from 1910 to 1945.

After threatening stern countermeasures and declaring that South Korea would “never lose” to Japan again, Moon has taken a more conciliatory tone over the past week as there was relief in Seoul that the impact of Japan’s trade measures might not be as bad as initially thought.

There have also been concerns that the government’s nationalistic calls for unity were allowing public anger toward Japan to reach dangerous levels.

Nevertheless, tens of thousands of people were expected join anti-Japan protests planned for Thursday, including an evening candlelit vigil near Seoul’s presidential palace.

Thousands of protesters dressed in raincoats marched in heavy rain toward the Japanese Embassy in Seoul. They carried signs that said “Apologize for War Crimes” and “Compensate Forced Laborers.”

“I have a lot that I want to say, but I can’t,” said an emotional Lee Chun-sik, 95, the only survivor among four plaintiffs who won a landmark compensation case last October against Japan’s Nippon Steel & Sumitomo Metal Corp., decades after being forced to work at the company’s steel mills during World War II.

The trade dispute comes as South Korea’s relations with North Korea worsen. Pyongyang has been ignoring Seoul’s calls for dialogue and in recent weeks test fired a slew of new short-range weapons that potentially threaten the South.

Experts say the North’s recent launches are aimed at building leverage for nuclear talks with the United States, and pressuring Seoul to coax major concessions from Washington on its behalf.

“In spite of a series of worrying actions taken by North Korea recently, the momentum for dialogue remains unshaken,” Moon said.

He called for new negotiations between the Koreas and the U.S. “at the earliest possible date.”