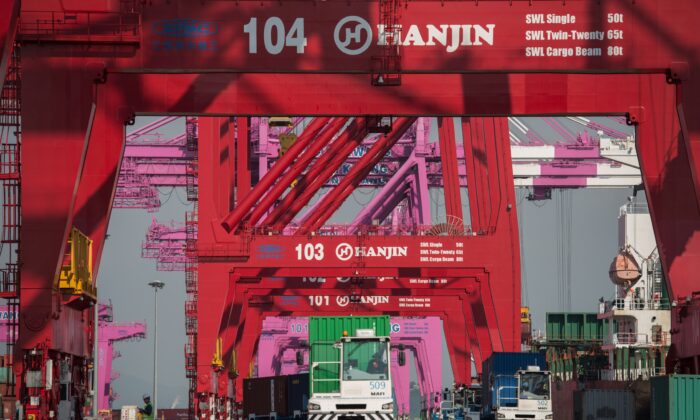 South Korea joined the U.S.-led Indo–Pacific Economic Framework (IPEF) that aims to counter the Chinese Communist Party, a move which could increase the country’s GDP in the long-term despite a reduced economic dependence on China, economists said.

In May, South Korea became a member of the IPEF, joining 12 other nations including Japan, Australia, New Zealand, and India. The other nations are Brunei, Indonesia, Malaysia, the Philippines, Singapore, Thailand, and Vietnam.

Together, these nations share a third of the world’s population and 40.9 percent of its GDP, according to South Korea’s Ministry of Industry, Trade, and Resources.

The move to join the IPEF is expected to reduce South Korea’s economic dependence on China but there are some challenges, says a report by the Economic Research Institute under the National Federation of South Korean Economists cited by the influential Maeil Business Newspaper on June 12.

The report said that IPEF membership would bring both positive and negative effects on South Korea’s economy.

The report said there may be some negative impacts on Korea’s economy in the short term if IPEF member countries restrict the import and export of strategic commodities to China, referencing minerals including uranium, raw materials for batteries such as lithium and cobalt, and electrical and electronic products including semiconductors and telecommunications.

However, despite reducing foreign trade with China, South Korea could find positive and corresponding advantages, such as an expansion of domestic industries and a boost in exports to other regions, the report said.

Led by “middle and high technology industries” in recent years, South Korea has found itself more able to replace China in fields such as chemicals, general machinery, automobiles, electrical appliances, and machinery.

In those industries, the export similarity index of Korea and China soared from 0.347 in 2011 to 0.390 in 2021, according to the Korea Institute for Industrial Economics and Trade. An index closer to 1 means more competition and similarity in export structures between two countries.

After participating in the IPEF, South Korea will curb exports of strategic industries to China and shore up domestic enterprises with policies to trigger technological innovation, the report said.

The economists estimate that in this case, Korea’s GDP will rise by up to 4 trillion won (about $30 billion) from last year, an increase of 2.12 percent from 2021. This may contribute to the positive effects of replacing China in some markets, offsetting negative results from downsized exports to China.

But in retaliation, China may restrict IPEF members’ exports of goods to the country, so the Korean government needs to grant domestic enterprises preferential policies to enable GDP to grow by up to 1.17 percent, otherwise GDP may fall by 0.45–1.61 percent, the report said.

It’s also crucial for lawmakers to support tax system research and development and companies returning from abroad, which would prompt Korea to take over the regional market that China previously occupied, the report suggested.