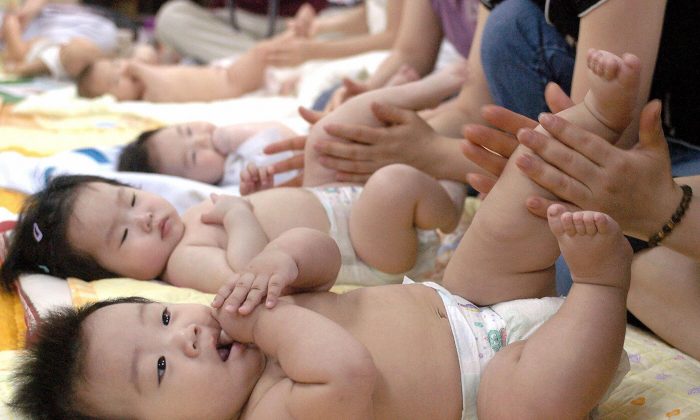 South Korean mothers practice massaging their babies during a training program at a public health center in Seoul in this file photo. (Kim Jae-Hwan/AFP/Getty Images)
By Seungmock Oh

SEOUL—With a low salary and high expenses, 34-year-old Sung-Jin Kim once thought he would never get married.

It was thanks to his father’s financial support, he said, that he was finally able to make plans to get married.

“Housing is not affordable. … As basic needs are not met, people just stay single.”

Still, having a child is a distant thought for Kim and his 25-year-old fiance, Song Min-jung, who are planning to tie the knot in December.

“The atmosphere is that people are choosing not to produce slaves,” said Kim.

For a country of 51 million, there were only 357,800 babies born in 2017, a reduction of 12 percent compared to the previous year. The country has one of the lowest birth rates in the world.

“From any perspective, the birth-related indices have gotten worse,” Dr. Kim Doo-Sub, president of the Asian Population Association, told The Epoch Times.

“There is severe competition for the younger generation to enter the labor market. It is not easy.”

The unemployment rate for South Koreans in their 20s stands at 9.9 percent, according to government statistics. But even that figure may be understated, as there could be “massaging” of the statistics, Dr. Kim added.

There are other factors as well that contribute to the low birth rate. According to Dr. Kim, another factor is that more women are getting advanced degrees and entering the workforce.

“Now, a woman’s education level is higher than men’s. With both the husband and the wife working, it becomes very difficult to have a baby,” Dr. Kim said.

That’s what Song, a nurse who works night shifts, finds to be an obstacle to having children.

“I cannot think of a life where I leave work after a night shift, return home in the morning, and then take care of children and do the housework,” she said.

“The lifelong jobs and retirement at the age limit were gone. Many households were led to poverty and devastation.”

This has a significant impact on marriage statistics. Hui-Jung Chu, a researcher at the Korea Research Institute for Vocational Education and Training, says temporary employees have less than a quarter chance of getting married, compared to regular employees.

“The decrease in the number of marriages has caused South Korea to have an extremely low birth rate since the 2000s,” Chu said.

According to Dr. Kim, South Korea has fallen into the “low birth trap,” in which a bad economy, unstable marriages, concern about children’s education, and other factors have combined to drive birth rates lower.

“It is difficult to get out of that now because none of the conditions are easy to resolve,” he said.