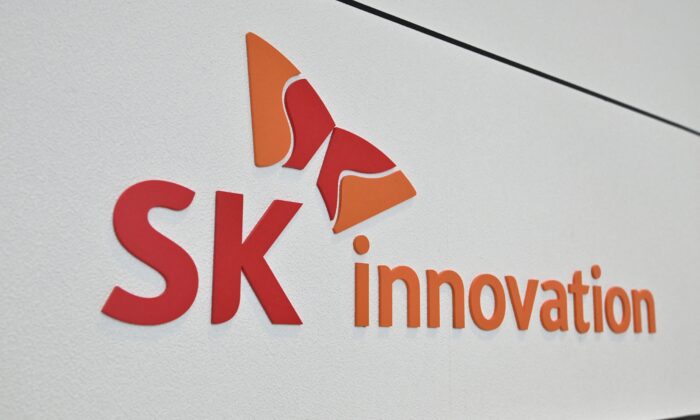 The logo of SK Innovation is seen at the company booth during the InterBattery 2021 exhibition at COEX in Seoul on June 11, 2021. (Jung Yeon-je/AFP via Getty Images)
By Jessica Mao

Jessica Mao
Jessica Mao is a writer for The Epoch Times with a focus on China-related topics. She began writing for the Chinese-language edition in 2009.
View profile
biggersmaller
Print

The three top battery manufacturers in South Korea will have to increase the prices of their products soon because the cost of raw materials from China has skyrocketed since the beginning of last year.

South Korea’s output of rechargeable batteries comprises nearly half of the global production, but the country’s key battery materials are heavily dependent on imports, especially rare earths and other raw materials from China.

An insider in the industry recently told The Korea Economic Daily that as Chinese companies continue to increase the prices of raw materials, Korean companies have no other choices. He believes that the price competitiveness of Korean companies in the global market will decline.

According to the report, China is not a major producer of cobalt, nickel, and lithium, but it imports these key raw materials from South America and Africa to process them. Due to the dominance of Chinese manufacturers over these materials, lithium is priced in yuan instead of U.S. dollars in the global market.

The industry insider also revealed that, if China ever cuts off the supply of battery materials, it will be a terrible situation for Korean companies and other battery manufacturers around the world.

Four months ago, the price of lithium carbonate was less than 95,000 yuan ($15,000) per ton. Since the beginning of 2021, the increase in lithium carbonate price has exceeded 230 percent. The domestic average price of phosphoric acid, an essential ingredient for the production of lithium iron phosphate batteries, has risen to 10,500 yuan ($1,652) per ton, a 109 percent increase compared to early 2021.

The prices of nickel, cobalt, and manganese have also risen continuously. As of Dec. 23, the price of cobalt went up to $70,205 per ton, the highest level in three years; the price of nickel exceeded $20,000 per ton in November, the highest in seven years.

According to insiders from China’s battery industry, the reason for the price hike is that the development speed of new energy vehicles has exceeded expectations, which means the demand for car batteries, and in turn, the upstream raw materials, have both increased dramatically. In addition, the COVID-19 pandemic and the insufficient production capacity of upstream minerals are also taking a toll.

Driven by the global shift to electric vehicles, South Korean companies have also established battery factories overseas, including plants in the United States and Hungary. But analysts warned that China has a near-monopoly in the field of rare earth metals, and it will take several years to get rid of the dependence on China.

“This is similar to previous incidents of the urea shortage and snow melting agents shortage in South Korea,” Lu said. “Its supply chain is problematic and there are inherent security risks. If South Korea is working with Western democracies, the risk is minimal. But now it is working with the CCP, its reliance of China will definitely be exploited by the CCP sooner or later.”

Lu believes that the urea shortage, which occurred in South Korea earlier this year, was due to the Chinese Communist Party’s (CCP) intentional manipulation to strangle South Korea.

“Because the U.S.-China friction is getting very fierce, both countries want to win over South Korea, as it has mastered relatively important chip technology,” he said. “And South Korea has always been playing a balance game between China and the United States, just to make money. In fact, to a certain extent, it was trying to inch closer to the CCP, despite the bullying it had suffered from Beijing. But South Korea is now leaning towards the United States. The CCP will definitely use battery raw materials to create chaos and put pressure on it.”

“It’s very dangerous to put all the eggs in one basket, especially when the basket is in the hands of a rogue regime such as the CCP,” he concluded.

Jessica Mao
Jessica Mao is a writer for The Epoch Times with a focus on China-related topics. She began writing for the Chinese-language edition in 2009.