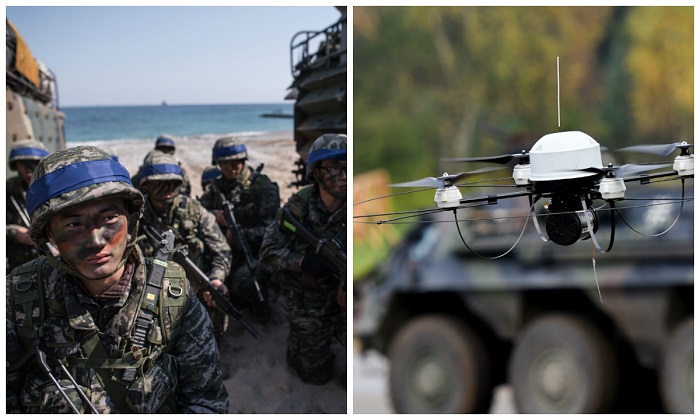 South Korean Weaponized Drones Unit Will Be a ‘Game Changer’

South Korea will have a military unit operating weaponized drones capable of conducting missions into North Korea and launching attacks by next year.

“The Army plans to set up a special organization to lead the development of dronebots, establish a standard platform and expand the dronebot program by function,” said the official who requested anonymity. “To begin with, we will launch a dronebot combat unit next year and use it as a ‘game changer’ in warfare.”

The team plans to use the drones on reconnaissance missions against North Korean targets such as nuclear and missile sites, reported Yonhap.

In case of a contingency, swarms of dronebots could be used to launch attacks on enemy forces.

As part of their consideration, the official said that they are looking at how the Israeli military created a similar unit in 2010.

While drones have been used in war conflict situations around the world for some time, emerging artificial intelligence technology will allow individual units to link up with others to create swarms, reported the Financial Times.

“South Korea has reached a level of consensus on swarm technology, but adoption will take a while,” said a person familiar with the military developments, reported the Financial Times. “The army is facing [political] pressure to reduce its forces, so it has to come up with new ideas.”

Proponents of swarm technology say swarms of cheaply made drones could thwart area access by bunching around and blocking ships or aircraft.

“Some of us in the field proposed the Republic of Korea military should take advantage of this superiority against North Korea,” Bong told the Financial Times. “Although it is unlikely, if the South Korean military wants, these drones can carry bombs as the nation is no longer bound by payload limits,” he added, referring to a recent U.S. decision to lift restrictions on South Korean munitions.

The talk about plans of drone warfare use against the North Korean threat comes during heightened tensions on the peninsular over Pyongyang’s nuclear and missile programs.