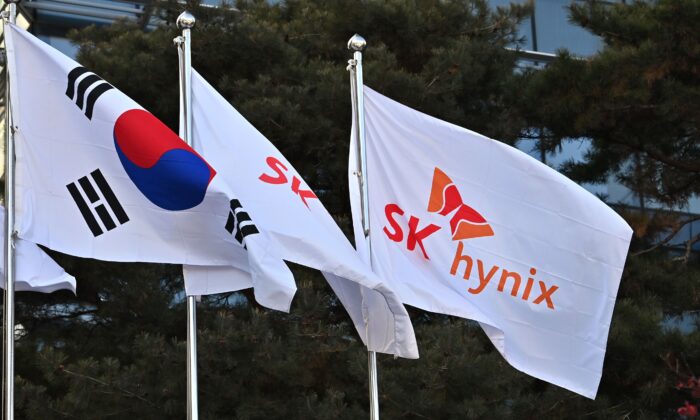 A major South Korean chip producer is planning to take cutting-edge equipment to a plant in China. The United States has pointed out that this is a military risk; and one expert says that it is crucial for Korean companies to move their production to the United States over China due to its increasing presence in the U.S. market.

According to Reuters, SK Hynix, the second largest semiconductor producer in the world, plans to bring the latest extreme ultraviolet (EUV) lithography chipmaking machine to China. The machine is produced exclusively by ASML, a high-tech firm in the Netherlands, and the destination is a semiconductor DRAM plant in China’s Wuxi city, Jiangsu Province.

The Wuxi plant is SK Hynix’s joint venture with China, with a mutual investment of more than 370 billion Won (about $313.3 million). Construction started in early October. The plant could account for half of SK Hynix’s DRAM production and 15 percent of global DRAM production, according to South Korea’s Yonhap News Agency.

A senior White House official told Reuters on Nov. 18 that the Biden administration will continue to put effort into stopping China from exploiting cutting edge technology from the United States and its allies, particularly those used for military purposes.

Katherine Tai, a representative of the U.S. Trade Representative’s Office, who recently visited South Korea, told Korean radio station CBS on Nov. 22 that the United States opposed the related company’s introduction of the cutting-edge equipment in China out of concern that it would pose a risk to national security.

To curb China’s ruling party from expanding its military power, former President Donald Trump required U.S. companies and foreign companies using U.S. tech to obtain prior approval from the U.S. Department of Commerce before exporting semiconductor tech, equipment, and components to China, according to an April 2020 Reuters report. The Trump administration also made many efforts to persuade the Netherlands government to prevent ASML from selling high tech to China’s leading semiconductor company, Reuters reported in January 2020.

Lee also said, “There is still plenty of time, so we will cooperate to apply EUV equipment at our China plant,” according to a Nov. 23 Global Economic News report.

The Dong-A Ilbo, a Seoul-based media, reported on Nov. 19 that Korean companies caught in the middle of the U.S.-China technology war are likely to be subject to retaliation from the Chinese Communist Party (CCP), as happened in “South Korea’s THAAD [missile defense system] deployment.”

Lee Jin-woo, head of the investment strategy group and research member of Meritz Securities in South Korea, told The Epoch Times that the U.S.-China conflict itself may bring some losses to Korean companies in China in local areas. However, for SK Hynix, he said it’s hard to determine if it will cause losses in the long run since South Korea is connected to the U.S. supply chain and benefits from it.

“It’s a question about the polarization of the supply chain between the U.S. and China,” Lee said.

Korean semiconductor companies such as Samsung and SK Hynix already set up their monopoly in the field of semiconductor memory, “today’s semiconductor market is formed through several rounds of supply competitions,” Lee added.

He emphasized practical reasons for South Korea to lean towards the U.S. market. “Except for some areas of AI, almost all of the technology dominance is held by U.S. companies,” Lee said. “Therefore, the realistic direction is to strengthen the linkage with the U.S. and strengthen the U.S.-led supply chain.”

Even though South Korea is the largest exporter to China, Lee explained, its export numbers have not increased in over 10 years. However, South Korea’s influence on the U.S. supply chain continues to climb, and he said that market expansion in the United States will make for a clear choice.

South Korea’s Economic Dependence Is Tilting Toward the US

According to a report released by the Bank of Korea on Nov. 3, Korea’s total exports to China have been largely stagnant since 2010. This is due to rising labor costs in China, multinational companies shifting their global production bases from China to Southeast Asia and India, and protracted U.S.-China trade conflicts. The Korean Bank predicts that exports to China will not be able to grow as fast as they have in the past, according to South Korean leading media Chosun on Nov. 3.

The United States opposition to SK Hynix upgrading technology for its China plant might lead to the domestic semiconductor industry avoiding investment in China, according to Lee. He said the trend of preference for China has already passed, because “the process of de-Chineseization has already begun … and China cannot provide as low labor costs as before in technology-sensitive fields.”

“It is possible to build factories for sales purposes in China’s domestic market, but China will become less and less attractive as [a] production or intermediary base,” Lee said. “That is to say, the scale of the investment itself may be less flexible than in the past.”

Lee Yunjung contributed to this report.