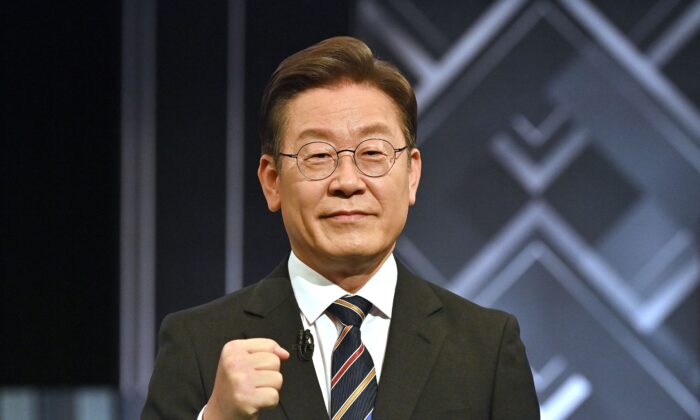 South Korea's presidential candidate Lee Jae-myung of the ruling Democratic Party poses for a photo before a televised debate for the upcoming March 9 presidential election at KBS studio in Seoul on March 2, 2022. (Photo by JUNG YEON-JE/POOL/AFP via Getty Images)
Asia & Pacific

South Korean presidential candidate for the ruling Democratic party faces backlash after placing blame on the Ukrainian president for the Russian invasion during a presidential debate.

The 2022 South Korean presidential election is scheduled for March 9, less than a week away. Meanwhile, the war in Ukraine has come into the international spotlight as the situation intensifies.

Lee Jae-myung of the Democratic Party (DP) made the controversial remarks during a televised presidential debate on Feb. 25, attributing the Russian invasion to Ukrainian President Volodymyr Zelensky’s political inexperience.

“In Ukraine, a novice politician of six months became president and declared [Ukraine’s] accession to NATO, which provoked Russia and eventually led to a clash,” Lee said, according to Yonhap News Agency.

The next day, Lee walked back his remarks and apologized, saying his intention was to highlight his main political rival’s inexperience in diplomacy and not to mock the Ukrainian leader.

“I plainly criticize Russia’s invasion and expressed my support for Ukraine … However, if I unintentionally caused even a partial misunderstanding among the Ukrainian people, it was due to my lack of ability to express myself,” Lee wrote on Facebook on Feb. 26.

Lee’s remarks, nevertheless, triggered international outcries as the crisis unfolds half a world away, unleashing a firestorm of criticism on social media as the global community condemns Moscow for its actions.

Another editorial published by the Seoul Economic Daily on Feb. 28 asked, “Lee blames the Ukrainian president a novice, but who is to blame for North Korea’s missile provocations?” rebuking Lee’s remarks citing North Korea’s continued aggression.

According to the article, on Feb. 27, North Korea test-launched another ballistic missile—the eighth missile test this year.

The DP had rushed to their candidate’s defense.

“President Zelenskyy is inexperienced in many ways. That’s a fact,” Rep. Woo Sang-ho, chief of the DP campaign committee, said during a radio interview, according to the Yonhap report.

“But at this point in time, when [Ukraine is] under attack, I believe that regarding this issue, it would have been correct to emphasize the invasion,” Woo added.

The country has also pledged to join economic sanctions imposed by the international community against Moscow. However, it has not considered separate sanctions apart from the coordinated response.

On Feb. 28, South Korea announced its decision to ban exports of strategic materials to Russia and join the multinational move to exclude the country from the SWIFT global payment network.

South Korea’s foreign ministry also said on Feb. 28 that it would promptly provide $10 million in humanitarian aid to Ukraine.

On March 1, Lee came out with a hard-line statement strongly condemning Russia’s invasion of Ukraine, saying he was shocked that a U.N. Security Council member carried out such an incursion in direct violation of the U.N. Charter, Yonhap reported.

The Ukraine crisis has also reinvigorated South Korea’s long-standing debate over the deployment of THAAD.

THAAD (Terminal High Altitude Area Defense) is a U.S.-designed and manufactured anti-missile system installed in South Korea between 2016 and 2017 to defend against North Korea’s nuclear missile build-up. However, Beijing has insisted that the deployment of THAAD affects China’s security and has since adopted a series of countermeasures against South Korea.

The system became operational in 2017. But Moon briefly suspended the deployment in wary of Beijing but later reversed that decision due to increased North Korean threats and public pressure.

Yoon openly endorsed the additional deployment of THAAD and purchasing THAAD batteries from the United States. However, Lee opposed the idea and proposed developing a homegrown missile defense system in fear of a backlash from Beijing.

Lee stressed the need for “practical diplomacy” as South Korea relies on China for 25 percent of its trade.

“Why redeploy such a useless thing [referring to THAAD] that also causes a backlash from China and harms [our] economy?” Lee said while citing DP President Moon Jae-in’s “Three No’s” policy.

In 2017, in an attempt to appease Beijing, the Moon government outlined three principles for security known as the “Three No’s”: no additional deployment of the U.S. missile system known as THAAD; no participation in a U.S.-led regional missile defense system; and no morphing a trilateral security alliance with the United States and Japan into a military alliance.

Yoon said in response to the DP’s policy, “Only when deterrence is maintained … can South Korea’s ‘national security risk’ be reduced.”

Yoon pointed out that it would take considerable time to deploy South Korea’s homegrown missile defense system, which is still under development.

Meanwhile, on the issue of foreign policy, Lee is running on the policy that South Korea should continue to develop a “strategic cooperative partnership” with China due to the country’s high level of dependence on Chinese trade.

In contrast, Yoon has committed to “further strengthen the South Korea-U.S. alliance.”