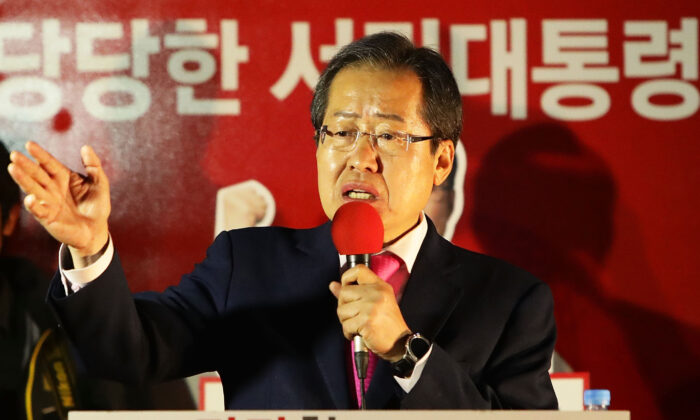 South Korean presidential candidate Hong Joon-pyo on Oct. 27 made a series of pledges to transform South Korean diplomacy if elected, as the country gears up for its presidential election in March 2022.

Hong pledged “Korea First” policies, such as building a nuclear sharing program between South Korea and the United States, abolishing the “Three No’s” commitment to China, and other campaign conventions on security, national defense, and foreign policy.

“South Korea is now isolated due to its disoriented diplomacy,” Hong said in a press conference held in Seoul on Oct. 27. “The Moon Jae-in government demonstrates no consistent principle in the intensified strategic competition between the United States and China. Its ‘walking on tightrope diplomacy’ has been carried out under the banner of strategic ambiguity.”

“As a result, both China and the United States have lost trust, leading to a diplomatic dilemma. At the same time, in domestic politics, Moon used ‘anti-Japanese sentiment’ to create the worst relationship with Japan.”

Hong is a candidate for the People Power Party, the largest opposition party and the main conservative party in South Korea. The former governor of South Gyeongsang Province and a former prosecutor currently serve as a member of the National Assembly in his fifth term. He was the presidential nominee of the Liberty Korea Party in the 2017 South Korean presidential election. During the 2017 presidential election, Hong was often compared to U.S. President Donald Trump for his campaign-style rallies.

Hong promised to strengthen the Korea-U.S.-Japan alliance and put national interests first if he became president.

“When I become president, I will restore our country’s pride and lay the groundwork for a leap forward as a G7 advanced country. And I will normalize the broken diplomatic relations such as Korea-U.S., Korea-China, and Korea-Japan under the grand principle of ‘Korea First,’” Hong pledged.

When asked how he plans to coordinate the redeployment of tactical nuclear weapons with the United States, he replied: “In May 2017, I met with members of the U.S. government and its opposition to discuss the need for a NATO-style nuclear sharing program. We have reached an agreement and shared a consensus in this regard.”

“When diplomacy couldn’t resolve the North Korean nuclear threats, how would the ‘Nuclear Weapons Non-Proliferation Treaty (NPT)’ protect [South Korean citizens]?” Hong asked. “Judging from the provisions of Article 10 of the NPT, it is possible to withdraw from the NPT for self-defense.”

Regarding South Korea-China relations, Hong pledged to “abolish the ‘Three Nos’ commitment with [the CCP] because it restricts [South Korea’s] security and sovereignty and is a major violation of security cooperation between South Korea, the United States, and Japan.”

In 2017, in an attempt to appease China, the Moon Jae-in government outlined three principles for security known as the “Three Nos”: no additional deployment of the U.S. missile system known as Terminal High Altitude Area Defense, or THAAD; no participation in a U.S.-led regional missile defense system; and no morphing a trilateral security alliance with the United States and Japan into a military alliance.

THAAD is a U.S.-designed and manufactured anti-missile system installed in South Korea between 2016 and 2017 to defend against North Korean nuclear missile threats. However, the CCP has insisted that the deployment of THAAD affects China’s security and has since adopted a series of countermeasures against South Korea.

Hong said that after South Korea deployed THAAD in 2017, Wu Dawei, the former special representative of China for Korean Peninsula Affairs, was asked whether the CCP could eliminate the North Korean nuclear threats or play a leverage role. Wu replied: “Because North Korea is a sovereign state, it cannot be done.”

“How can [the Chinese Communist Party (CCP)] point fingers at South Korea’s defense policy when it cannot eliminate or control North Korean nuclear weapons?” Hong said. “This is against common sense.”

Hong said he would “hold a summit with Chinese leader Xi Jinping to correct the abnormal relationship created by the Moon Jae-in administration” and “break free from pro-China dialogues, restore national dignity and the people’s self-esteem, and carry out diplomacy centered on national interests.”

In addition, Hong suggested that he intends to restore communication and dialogue with China to resolve environmental, economic, and exchange issues, such as the air pollution from China and the nuclear power plant issues on the east coast of China, which have not been addressed previously.

Regarding the South-Korea-Japan relations, Hong promised to maintain the “General Security of Military Information Agreement” and promote the “Joint Declaration on the Future Cooperation and Comprehensive Partnership between South Korea and Japan” with Prime Minister Fumio Kishida.

The latest polls show significant differences in popularity among the People Power Party presidential candidates from the initial stages. Recently, Hong’s support has risen significantly. According to the latest polling released by the Korea Society Opinion Institute (KSOI) on Oct. 25, Hong is tied with Yoon Seok-yeol, another conservative candidate in the party, at 26.9 percent. Yoon is the former prosecutor general of South Korea who was previously leading in the polls.