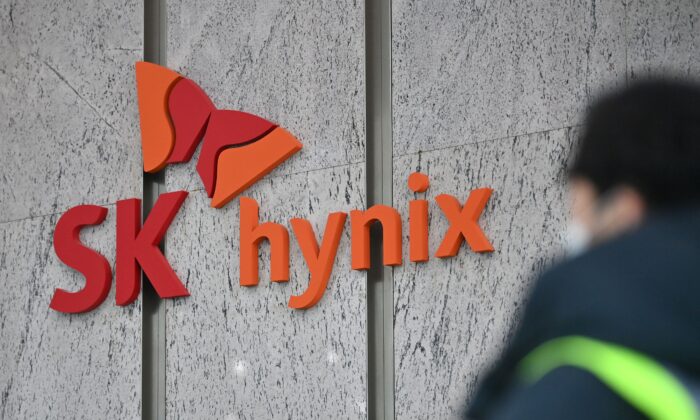 A man walks past a logo of SK Hynix at the lobby of the company's Bundang office in Seongnam on Jan. 29, 2021. (Jung Yeon-je/AFP via Getty Images)
Tech News

South Korean memory chipmaker SK Hynix Inc. has unveiled the industry’s highest-performing DRAM with a data speed capable of transmitting 163 full-HD movies in a single second. Experts describe this as the fastest and largest capacity memory chip to date.

The memory chip is called HBM3, short for High Bandwidth Memory 3. Its data processing rate has increased by 78 percent compared to its predecessor, HBM2E.

The company said HBM3 is the fastest DRAM in the world and has the largest capacity and a significantly improved quality level. The introduction of this new chip will help consolidate the company’s leading position in the market.

SK Hynix is ​​the world’s second-largest memory chip manufacturer, and its main customers include Apple Inc.

DRAM is the most common memory chip used in computers and it’s able to store a large amount of data in a small physical space.

HBM is a new type of CPU/GPU memory (“RAM”) that vertically stacks memory chips like floors in a skyscraper. The design shortens the time for information commute.

“HBM is the pride of [South Korean] semiconductors,” said Jinwook Burm, chairman of the Korean Chip Engineering Society and a professor at Sogang University in South Korea, told The Epoch Times on Oct. 26.

According to Burm, HBM3 is by far the fastest memory device that can read and write the largest amount of data. It is also the fourth generation of HBM technology, succeeding the HBM1, HBM2, and HBM2E.

SK Hynix’s HBM3 can process up to 819GB of data per second—the industry’s fastest—and will be provided in two capacity types of 24GB—the industry’s biggest—and 16GB.

HBM3 is expected to be widely adopted by high-performance data centers and machine learning platforms that enhance the level of artificial intelligence and supercomputing performance.

“The thickness of the chip is approximately 30 micrometer (μm, 10-6m). It is extremely thin and must be stacked neatly. This extremely difficult process has been achieved in HBM technology. Although challenging, it will develop into an industry standard in the future.”

“Although some companies have acquired the technology to produce HBM memory, SK Hynix has maintained a leading position in the HBM field with its speed and capacity,” he added.

The company said its latest DDR5 has a 7.2 gigabits per second (Gbps) data processing speed, more than double the DDR4 speed of up to 3.2 Gbps.

The CPU has often been called the brains of a computer and GPU its soul. CPUs are suited to various workloads, executing the commands and processes needed for computers and operating systems, while GPUs are efficient at manipulating computer graphics and image processing.

“Samsung’s mass production of 14nm EUV DDR5 DRAM is an amazing feat. The reason its memory market share exceeds 70 percent is because it has ensured its technological advantages,” Burm said.

Burm believes that Samsung and SK Hynix will continue to maintain their lead in DRAM.

“I think that [South Korea] can overcome the shortcomings of the chip foundry sector by ensuring its technological advantages,” Burm said. “In the fierce competition with Taiwanese companies such as TSMC and Micron Technology, it will be an extraordinary challenge for U.S. companies to regain their share in the semiconductor industry.”

Burm is optimistic about the future of semiconductors and believes that the global shortage may only be temporary. He sees explosive growth in the semiconductor market once the shortage is over.

“The global semiconductor demand in data centers, artificial intelligence (AI), and automotive sectors increase 30 to 40 percent on a yearly average,” he said. “And with the increased usage of electronic devices and the advent of self-driving vehicles, there is more demand than ever.”