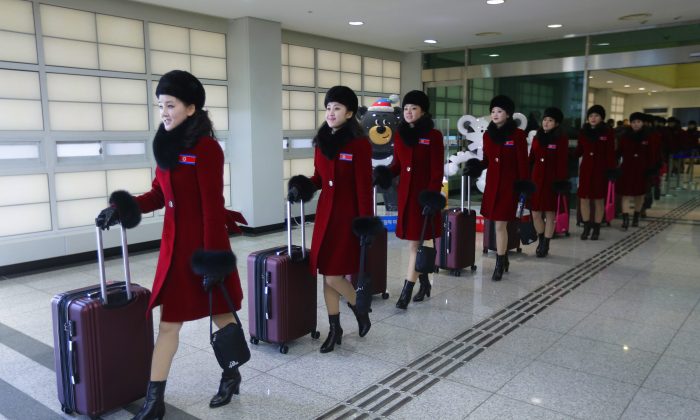 South Korea has approved a plan to pay for the costs of hosting the North Korean delegation to the Winter Olympics.

On Wednesday, Feb. 14, the South and North Exchange and Cooperation Promotion Council signed off on a record $2.85 billion won (US$2.64 million) to pay for the visiting costs of the 424-strong North Korean contingent consisting of a cheering squad, orchestra, taekwondo performers, journalists, and other supporting personnel.

“It is aimed at providing financial support for the North Korean delegation’s visit to South Korea and for carrying out cultural cooperation projects (between the North and South),” the Unification Ministry said, reported Yonhap News Agency.

The government funds will mainly pay for the food and accommodations of the visiting North Koreans. According to Reuters, most of the delegation stayed at luxury hotels in Seoul, and also near the Olympic venue in Pyeongchang.

The amount surpasses the 1.35 billion won (US$1.27 million) paid by South Korea for the 650 North Koreans who visited the port city of Busan for the Asian Games in 2002.

The International Olympics Committee will cover the costs of the 22 North Korean athletes participating in the games.

Expenses of hosting the high-level official delegation, which included Kim Jong Un’s sister, Jim Yo Jong, will be paid for separately from the government budget, said a representative for the Unification Ministry, who did not provide further details.

North Korea’s last-minute inclusion in the games was confirmed after three rounds of talks between Pyongyang and Seoul in January this year.

Unification Minister Cho Myoung-gyon said on Wednesday that North Korea’s participation in the Olympic Games was an opportunity that “open[ed] up the door for peace on the Korean Peninsula,” reported Yonhap.

The budget for the North Koreans’ stay will be taken out of the Inter-Korean Cooperation Fund, part of the Unification Ministry’s spending budget.