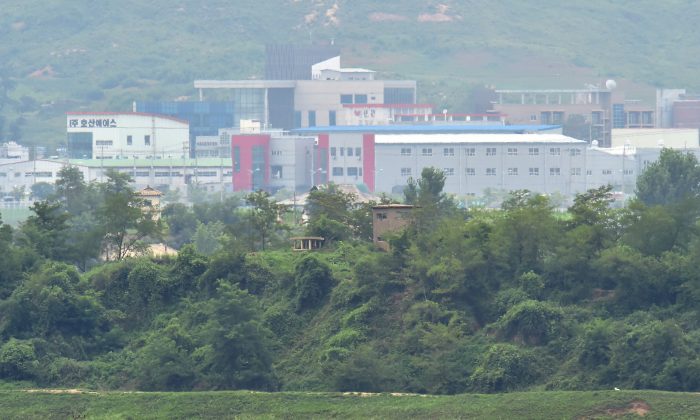 The Kaesong Industrial Complex as seen from the truce village of Panmunjom in the Demilitarized Zone dividing the two Koreas on July 22, 2015. (Jung Yeon-je/AFP/Getty Images)
Asia & Pacific

It was unclear how long the shutdown at the industrial complex in the border city of Kaesong would last, or even how long it would take South Korean companies to close down. Pyongyang has yet to comment, but Seoul said that North Korean workers did not report to work at Kaesong on Thursday.

The shutdown is one of Seoul’s strongest available punitive measures and will hurt impoverished North Korea’s finances. Seoul said it wants to stop Pyongyang from using hard currency from the park to develop its nuclear and missile programs.

North Korea on Sunday launched a rocket that the world sees as a banned test of ballistic missile technology.

The South’s Unification Ministry says about 130 South Koreans are planning to enter Kaesong on Thursday to begin shutdown work, and that nearly 70 South Koreans who had been staying there would be leaving.

North Korea, in a fit of anger over U.S.-South Korean military drills, pulled its workers from Kaesong for about five months in 2013. But, generally, the complex has long been seen as above the constant squabbling and occasional bloodshed between the rival Koreas. South Korean President Park Geun-hye has now done something her conservative predecessor resisted, even after two attacks blamed on North Korea killed 50 South Koreans in 2010.

South Korean Unification Minister Hong Yong-pyo told a news conference that the suspension of operations at the park would stop the North from using currency earned there to develop nuclear and missile technology.

The park, which started producing goods in 2004, has provided 616 billion won ($560 million) of cash to impoverished North Korea, Hong said.

“It appears that such funds have not been used to pave the way to peace as the international community had hoped, but rather to upgrade its nuclear weapons and long-range missiles,” he said at the televised briefing.

The Unification Ministry, which is responsible for relations with North Korea, said in a statement that the government had “decided to completely shut down” the park. It notified North Korean authorities of the decision and asked them to help ensure the safe return of South Korean citizens from Kaesong.

There was no immediate reaction to the move from North Korea.

The United States supported the move by its close ally, and said it was considering its own, unspecified “unilateral measures” to punish Pyongyang for its recent nuclear test and rocket launch, even as the U.N. Security Council deliberates imposing more multilateral sanctions.

South Korea’s government will provide financial compensation to companies that operate at the park, the Finance Ministry said.

South Korean businesses with factories at the park reacted with a mixture of disappointment and anger. In a statement, the association of South Korean companies in Kaesong denounced the government’s decision as “entirely incomprehensible and unjust.”