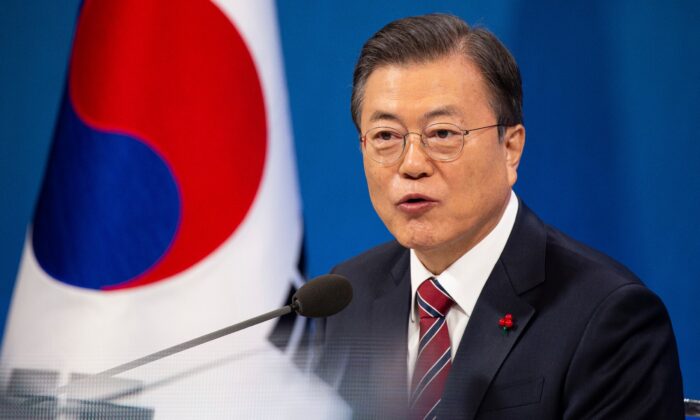 South Korean President Moon Jae-in said his country wouldn’t participate in the U.S.-led diplomatic boycott of the 2022 Beijing Winter Olympics, citing a need for China’s help to “enable denuclearization” on the Korean Peninsula.

“We have not received a request from any other country, including the United States, to participate in a diplomatic boycott. We are not considering a boycott measure,” Moon told reporters after a summit with Australian Prime Minister Scott Morrison on Dec. 13.

The United States was first to announce a diplomatic boycott of the Beijing Winter Olympics, in protest of the Chinese regime’s “ongoing genocide and crimes against humanity in Xinjiang.” Australia, the UK, Canada, Lithuania, and New Zealand have since joined the protest. All the countries taking part in the diplomatic boycott will allow their athletes to compete.

Moon said that while South Korea values its alliance with the United States on a diplomacy and security affairs basis, his government must also consider “peace and security” on the Korean Peninsula.

“We need the constructive efforts of China to enable denuclearization of DPRK [Democratic People’s Republic of Korea]. Therefore, Korea is focused on the steadfast alliance with the U.S. and also with China,” he said.

Moon went on to clarify South Korea’s interest in achieving a free and open Indo–Pacific region through a “harmonized relationship” with China.

“There may be certain conflicts, and there may be some issues of competition. However, if you look at climate change and the supply chain issue and also in terms of pandemic and infectious diseases, there are global challenges, and these are domains where we do need to engage in cooperation and collaboration,” he said.

When asked about the Korean Peninsula peace process, Moon said the relevant parties—the United States, China, and North Korea—have expressed support “in principle” to an end-of-war declaration, but South Korea has yet to enter negotiations with its northern neighbor.

Moon noted that North Korea insists that any formal treaty to end the 1950–53 Korean War, which ended in an armistice, must first be preceded by an end to U.S. “hostilities” toward Pyongyang.

“And because of that, we are not able to sit down for a discussion negotiation on the declarations between South and North Korea, and those between North Korea and the United States,” Moon said.