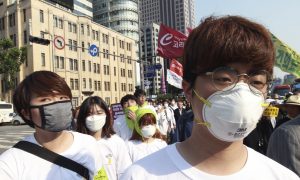 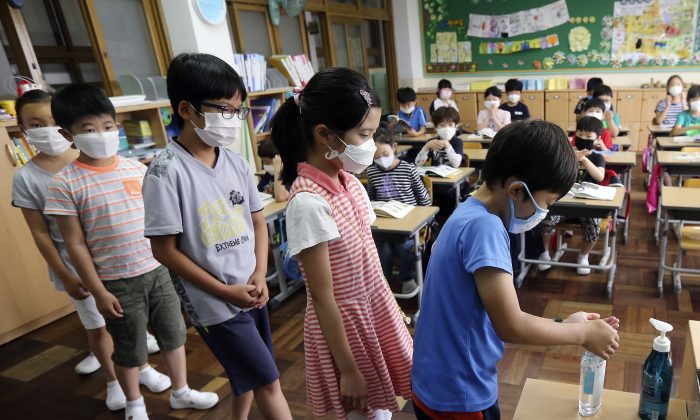 South Korean elementary school students wear masks as a precaution against the MERS, Middle East Respiratory Syndrome, virus as they sanitize their hands to protect against possible MERS virus at an elementary school in Busan, South Korea, Tuesday, June 9, 2015. South Korea is determined to end this week the outbreak of Middle East Respiratory Syndrome, saying upcoming several days will be a critical moment on whether to overcome the medical crisis.(Cha Geun-ho/Yonhap via AP)
Asia & Pacific

South Korea Says Its Deadly MERS Outbreak May Have Peaked

SEOUL, South Korea—South Korea believes its MERS virus outbreak may have peaked, and experts say the next several days will be critical to determining whether the government’s belated efforts have successfully stymied a disease that has killed seven people and infected nearly 100 in the country.

The biggest outbreak of Middle East Respiratory Syndrome outside the region where it was first seen in 2012 was introduced to South Korea last month by a 68-year-old man who had traveled to Saudi Arabia and other nearby countries.

When he got sick after his return to South Korea, he visited several hospitals and clinics, where dozens of other patients and hospital workers were infected before officials found he had MERS. Gradually, the government began isolating victims and quarantining those who’d had contact with them.

There has been widespread fear here of the poorly understood disease, which has no vaccine and as much as a 40 percent mortality rate. There also had been growing criticism over failures by health workers and the government to initially recognize and quickly contain the disease.

Nearly 3,000 people have been placed in isolation and 2,200 schools closed in South Korea. Although MERS spreads through close contact with sick people, not through the air, many people here have avoided going to crowded places like baseball parks and movie theaters. Travel agencies report a sharp increase in the number of foreigners canceling plans to visit South Korea.

The outbreak, however, has so far been contained in hospitals and there’s no evidence, the U.N. health agency says, of “sustained transmission in the community.”

Authorities say the first MERS patient didn’t reveal his Saudi Arabia trip to doctors until he arrived at the Seoul-based Samsung Medical Center after being treated at three other hospitals, including St. Mary’s Hospital in Pyeongtaek, south of Seoul. Samsung and St. Mary’s have seen most of the country’s infections.

The initial patient’s wife, who was the country’s second MERS case and is now out of the hospital, recently told a local TV station that her husband didn’t intend to hide information about his travels, but simply had trouble talking to doctors because of his high fever.

Because the virus’ incubation period is estimated at five to six days on average, extending up to about two weeks, experts believe there won’t be any more cases directly infected by the first patient. The Health Ministry said that no more MERS cases have originated from St. Mary’s Hospital.

There are still concerns about Samsung Medical Center, where at least 37 people have been infected, although fewer cases have been reported there in recent days.

The initial patient was eventually isolated on May 20 after doctors at Samsung, where the man ended up, suspected he had MERS and alerted the government, which moved him to a government-run facility. But a week later, another so-called “super-spreader” — a man who’d been infected by the initial patient at St. Mary’s Hospital — checked into an overcrowded Samsung Medical Center, where he was forced to stay for several days in the emergency room. He spread the disease among doctors, visitors and other patients there, according to health officials.

The maximum incubation period for those infected by the second “super-spreader” ends around this Friday, experts said, which raises hopes that the outbreak could weaken soon.

“I cautiously predict (MERS) will peak today” and be stabilized in the next few days, Health Minister Moon Hyung-pyo told lawmakers Monday.

The prospects for the virus weakening this week depend on whether there are many people who have evaded government quarantine measures and infected other people in various places, said Jacob Lee, an infectious disease expert at Kangnam Sacred Heart Hospital in Seoul.

There are concerns that South Korea’s economy could suffer as tourism and business travel drop because of MERS fears.

Hong Kong has issued a red travel warning for South Korea, the second highest of three levels, and advised residents against unnecessary travel there. Hong Kong has been hypersensitive to infectious diseases since the outbreak of SARS in 2003, which killed hundreds of people.

MERS has mostly been centered in Saudi Arabia. It belongs to the family of coronaviruses that includes the common cold and SARS, and can cause fever, breathing problems, pneumonia and kidney failure.