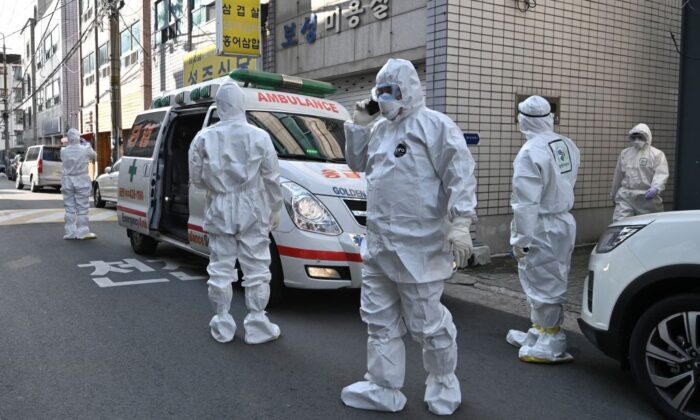 South Korean medical workers wearing protective gear visit a residence of people with suspected symptoms of the novel coronavirus to take samples, near the Daegu branch of the Shincheonji Church in South Korea, on Feb. 27, 2020. (Jung Yeon-je/AFP via Getty Images)
CCP Virus

In South Korea, there are now at least 1,766 confirmed cases of the novel coronavirus disease COVID-19, after the country reported 505 new cases on Feb. 27.

The Korea Centers for Disease Control and Prevention (KCDC) announced 171 new cases late on Thursday. Earlier in the morning, the government reported 334 new cases from the previous day.

The 505 new cases mark the largest increase in a day since South Korea reported its first confirmed case on Jan. 20.

A week ago South Korea had 104 known cases of the virus. Since then, the country has reported triple digits in new cases daily, with 144 cases reported on Tuesday and 284 cases on Wednesday.

During the same week, South Korea also saw its national death toll increase from one to 13.

Daegu is located roughly 186 miles southeast of the capital Seoul.

Among the 1,766 cases, 1,132 are in Daegu and 345 are in North Gyeongsang province. Twenty-six patients have recovered from the disease and been discharged from hospital.

According to local outlet Yonhap News Agency, about 46 percent of the 1,766 cases are connected to the localized outbreak from Shincheonji Church in Daegu.

The virus has also steadily spread to Korean military personnel. Yonhap reported late on Feb. 27 that 22 active-duty soldiers and three military civilian workers have been infected with the virus.

Of the 25 military cases, 15 are in the Army, eight in the Air Force, and one each in the Navy and the Marine Corps.

About 9,900 service members of the Korean military are quarantined at their bases. Among them, 820 have symptoms of the virus or have come in contact with infected patients, while the remaining recently visited Daegu or nearby areas after Feb. 10.

On Feb. 26, USFK announced that a 23-year-old U.S. soldier stationed at Camp Carroll in South Korea had tested positive for coronavirus—the first U.S. soldier to be infected.

Camp Carroll is located in the village of Waegwan, which is about 12 miles from the city of Daegu.

Local newspaper Korea Herald reported on Feb. 27 that five officials of the Daegu city government were also diagnosed with the virus, prompting the city government to close down several buildings and ask hundreds of city government employees to work from home.

South Korea’s professional baseball league has canceled all 50 preseason games scheduled from March 14 to 24 in response to the outbreak, Yonhap reported on Feb. 27. Currently, the regular season is still scheduled to begin on March 28.