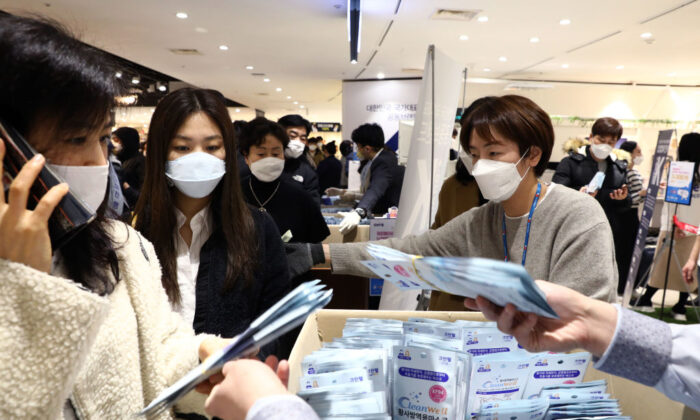 The Korea Centers for Disease Control and Prevention (KCDC) reported 376 new cases of the virus on Sunday morning, before reporting 210 more cases in the afternoon.

One death involved an 83-year-old man in the city of Daegu, who had a stroke and suffered from hypertension before being infected with the virus, according to local outlet Yonhap News Agency. Daegu is about 186 miles southeast of the capital Seoul.

An 86-year-old woman who had the disease died of dyspnea early Sunday. She also had diabetes and hyperlipidemia. The third death involved an 80-year-old man who had long been suffering from hypertension.

Of the 586 new cases, 469 are in Daegu and 67 are in the broader North Gyeongsang province. Seoul has 10 new cases and the coastal city of Busan has three new cases.

Since Feb. 21, South Korea has reported triple digits in new cases every day, and it reported a record daily of 813 new cases on Saturday.

Among the new infection cases reported on Sunday, one case involves a 45-day-old baby, whose parents had already tested positive for the virus, according to local outlet Yonhap News Agency. Her father, who tested positive last Thursday, is a follower of the Shincheonji Church.

There are now 2,705 cases in Daegu, and about 73 percent of these cases are connected to the church, according to KCDC.

On Saturday, South Korea’s justice ministry reported that 3,600 followers of the church returned from China between July 1 last year and Feb. 27 this year, according to Yonhap. Among these followers, 42 had traveled to Wuhan, where the outbreak began in December last year.

The U.S. Forces Korea (USFK) reported on Saturday that the wife of a U.S. soldier—who is stationed at Camp Carrol and tested positive for the virus days ago—had also tested positive.

“The patient has not been in contact with any other USFK or USFK affiliated personnel since going into quarantine,” USFK said, adding that she had been in self-quarantine since Feb. 26 following the confirmation of her husband being sick with the virus.

Two other USFK-related individuals are infected with the virus. One is a 61-year-old woman, a widow of a retired soldier, and the other is a male South Korean employee at Camp Carroll.

Camp Carroll is located in the village of Waegwan, about 12 miles from the city of Daegu.

Meanwhile, the U.S. State Department has raised its travel advisory for Daegu to “Level 4,” the highest of a four-level system, urging people not to travel to the city due to “the level of community transmission of the virus and imposition of local quarantine procedures.”

The State Department has a “Level 3” travel warning to other parts of South Korea, calling for travelers to reconsider travel to the East Asian country.