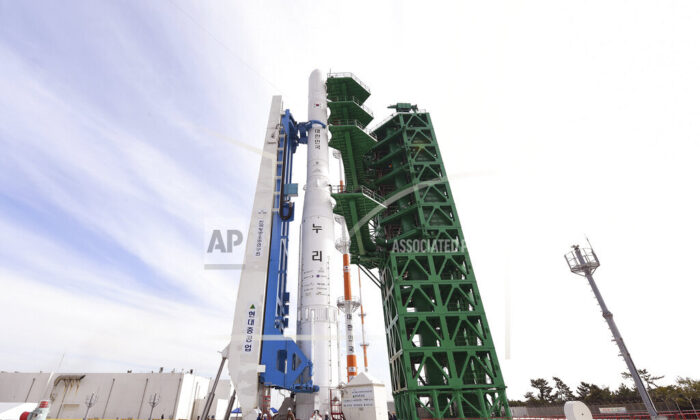 Marking a leap for its space program, South Korea launched a domestically made rocket into space on Thursday, but it failed short of delivering a dummy payload into orbit.

After decades of U.S. restrictions on missile development, South Korea built the three-stage Nuri space launch vehicle entirely using indigenous technology. The Nuri, developed by Korea Aerospace Research Institute (KARI), was designed to deliver a payload of 1.5 tons (3,300 pounds) into an orbit of 372 to 497 miles (600 to 800 kilometers) above Earth.

The 154 foot (47-meter) Nuri is powered by five 75-ton class rocket engines placed in the rocket’s first and second stages. It lifted off from Naro Space Center, South Korea’s only spaceport.

“Although (the launch) failed to achieve its objectives perfectly, it was an excellent accomplishment for a first launch,” South Korean President Moon Jae-in, who observed the launch on-site, said in a televised speech.

According to Lim Hye-sook, South Korea’s science minister, initial phases of the launch went smoothly as the first and second stages of Nuri separated properly. Based on launch data and current information, there was a glitch when the third stage’s engine burned out 50 seconds earlier than initially planned.

This failed to provide the ejected payload with the necessary speed to stabilize in orbit. Ejected at 435 miles, the dummy payload was a 1.5-ton stainless steel and aluminum block.

Further investigations by KARI will lead to more clarifications on what went wrong and improvements needed for the next launches, including one in May 2022. After the 2022 trial, KARI is expected to launch Nuri with a real satellite.

Nuri is also expected to launch moon exploration vehicles and commercialize launch services for the Southeast Asian market. Inspired by the success of SpaceX, the objective is to develop low-cost and reliable rockets for commercial use.

South Korea is vying to become the 10th country in the world to launch a satellite successfully into orbit using its own technology. Non-reliance on other nations is critical if the country plans on fulfilling its space ambitions.