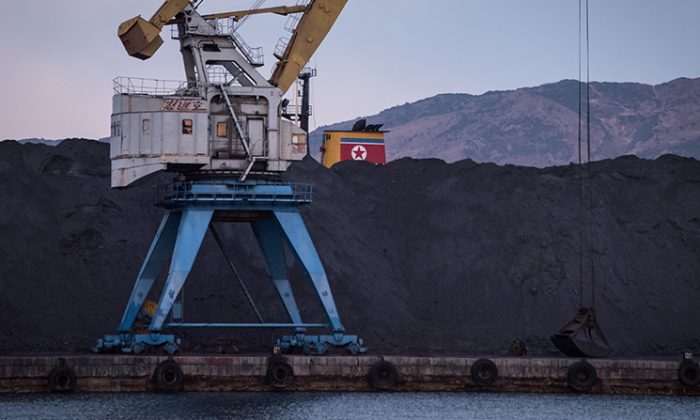 A mountain of North Korean coal, stranded by a UN ban on coal exports from North Korea, is piled up on one side of the barrier in Rajin Port, North Korea, on November 21, 2017. (ED JONES/AFP/Getty Images)
Asia & Pacific

South Korea had knowledge of where the coal likely came from. The authorities searched two ships with coal from Russia, but did not seize or detain them, Financial Times said.

The ships were not detained partly because U.N. sanctions then did not require it unless there’s a record of evading sanctions, Foreign Ministry official told The Wall Street Journal.

The Korea Customs Office is now investigating the South Korean importers. “The imports of North Korean coal and its domestic distribution have been spotted by our authorities through close international coordination and an investigation is underway,” Noh Kyu-Duk, a spokesman from South Korea’s Ministry of Foreign Affairs, told Financial Times.

According to the U.N. report, the coal had been shipped from Wonsan and Chongjin ports in North Korea to Russian’s Kholmsk on six occasions from July to September last year. It was then reloaded onto two ships heading to South Korea there.

Sky Angel, a ship registered in Panama, was loaded with coal at the terminal in Kholmsk, Russia, where the North Korean coal had been discharged. The coal was unloaded in Incheon, South Korea, on Oct. 2, 2017.

The amount of coal delivered by the Sky Angel, which is currently flying a Chinese flag, was not specified, according to the U.N. report.

The other shipment was by Rich Glory, a ship registered in Sierra Leone. Over 5,500 tons of coal, valued at $325,000, was unloaded in Pohang Port in South Korea on Oct. 11. The U.N. report said the coal originated in North Korea.

Seoul’s foreign ministry reconfirmed its ongoing investigation and said that anyone involved in the illegal imports of North Korean coal will be punished, Yonhap News Agency reported.