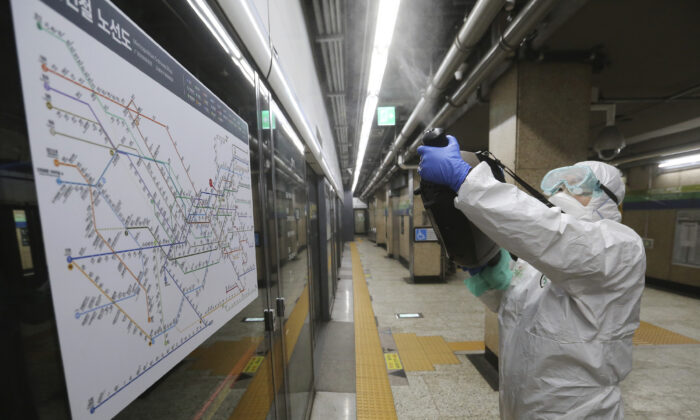 A worker wearing protective gears sprays disinfectant as a precaution against the coronavirus at a subway station in Seoul, South Korea, on Feb. 21, 2020. (Ahn Young-joon/AP Photo)
Asia & Pacific

South Korea is pivoting to try to stop the new coronavirus from spreading locally amid a surge of new cases, many of them linked to a church gathering in the city of Daegu.

South Korea confirmed 100 new cases of COVID-19 on Friday, bringing the total in the country to 204. Authorities also said a second person has died.

Prime Minister Chung Sye-kyun told reporters in Seoul that “the government has so far focused on curbing infections coming from outside the country.”

“From now on, the government will further prioritize preventing the virus from spreading locally,” he added, according to Yonhap.

The government would take “strong and swift” action to stem further spread of the new virus, which emerged in the Chinese city of Wuhan in December. Measures include designating the Daegu and Cheongdo areas as special care zones, Chung said.

An urgent focus of government workers is to locate people who were in contact with COVID-19 patients. Officials also want to focus on curing patients.

The World Health Organization’s (WHO) list of virus cases classifies the cluster from the Diamond Princess cruise ship, docked in Yokohama, Japan, as separate from domestic cases in the country. Under the classification, South Korea has the most cases outside of China apart from the cases from the ship.

WHO officials said they’re concerned about the rising number of cases in South Korea.

“We’re working closely with the government to fully understand the transmission dynamics that led to this increase,” WHO director-general Tedros Adhanom Ghebreyesus told reporters in Geneva on Friday. The United States warned travelers this week of “apparent community spread” of the new virus in South Korea and other nearby countries.

“Community spread means people have been infected with the virus, including some who are not sure how or where they became infected. At this time, the extent of virus spread is not sustained or widespread enough to meet the criteria for a travel notice,” the U.S. Centers for Disease Control and Prevention stated.

South Korea’s Centers for Disease Control and Prevention reported 20 new cases on Wednesday and 53 cases on Thursday before the surge on Friday.

Eighty-five of the 100 newly reported cases were linked to the Shincheonji church in Daegu. A 61-year-old woman who tested positive on Feb. 18 attended the church before she was diagnosed, officials said. The church, which is usually full of thousands of worshippers, was closed on Friday and surrounded by empty streets, according to Reuters.

The single worker there emerged and threatened to call the police if anyone tried to enter the building. “All of our 9,000 believers are at home,” the man, who declined to give his name, said before placing some “no entry” signs around the premises. The man said staff members cleaned and disinfected the building twice this week.

Most of the other cases in South Korea are in Cheongdo County.

The dozens of cases linked to the church would qualify as a “super spreading event.”

“In those kind of events or situations, we can see a rapid increase in numbers,” WHO Infections Hazards Director Dr. Sylvia Briand said at the WHO briefing. “But as long as we can understand how the transmission has occurred and how the new cases are linked to this event, we can make sure that we can stop the transmission.”

Moon Jae-in, South Korea’s president, told his Cabinet earlier in the week that the economic situation due to the virus “is more serious than we think.”

“To stem the spread of COVID-19, the Government is mobilizing nationwide capabilities and going all-out in its response,” he said.

Moon spoke with Chinese leader Xi Jinping for 32 minutes on Thursday, the South Korean government said. The leaders agreed to share information on clinical treatments and “strengthen cooperation between quarantine authorities going forward,” according to a call readout.