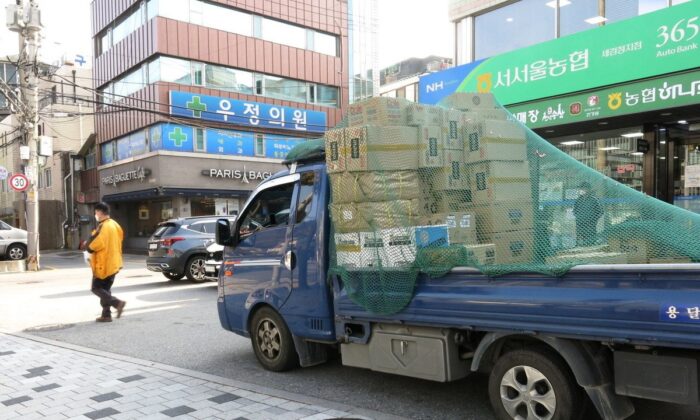 After China tightened the export of urea due to a coal shortage, South Korea went into a deep crisis as the country’s nearly 4 million diesel vehicles cannot operate without urea. (Lisa Bian/The Epoch Times)
Asia & Pacific

South Korea is heavily dependent on China for imports of urea, a product derived from coal. In mid-October, China reduced its urea exports due to a coal shortage. South Korea is now in a deep crisis as the country’s nearly 4 million diesel vehicles cannot operate without urea.

Urea is the main component of diesel exhaust fluid (DEF), an additive used in diesel vehicles to reduce emissions. In South Korea, DEF is not only mandatory for air quality control purposes, but also essential for the proper operation of diesel vehicles sold after January 2015. Diesel vehicle owners need to fill their DEF reservoirs regularly. Otherwise, the vehicle may encounter an equipment breakdown or a failure in the engine fuel system.

About 4 million diesel vehicles in South Korea need urea to operate, among them 2 million are trucks. That means, the shortage of automotive urea has sent the country’s logistics industry into chaos.

Data from the Korea Trade-Investment Promotion Agency (KOTRA) showed that China is the largest urea producer and exporter in the world, supplying about 5 million tons of urea every year. In the first nine months of this year, South Korea imported 564,000 tons of urea from China, accounting for 14 percent of China’s total urea exports, second only to India.

In those same nine months, 97.6 percent of South Korea’s industrial urea—the main raw material for the production of automotive urea—came from China, according to the Korean Ministry of Industry.

In the past, Korean companies also produced urea, but they were at a price disadvantage when competing with products from China and Russia. Almost all urea manufacturers withdrew from the market around 2013. For instance, Korea Fertilizer Co., Ltd. was unable to bear the losses and ceased urea production in 2011.

According to Korean media, Lotte Fine Chemicals, South Korea’s largest manufacturer of automotive urea, said that its current inventory will be sold out by the end of this month.

Automotive urea is now trading on the market at a price 10 times higher than before. At the same time, the supply of urea at gas stations has often been interrupted. Some are hoarding the product, hoping to make huge profits in the future.

Incheon Port Authority said that if the shortage continues to the end of this month, cargo handling at Incheon Port will be affected, as many trucks used for loading and unloading goods are diesel-powered vehicles.

Moreover, 80.5 percent of the fire trucks and 90 percent of ambulances across the country need urea to operate.

A man from the National Construction Union of South Korea held a demonstration in front of a government building in Seoul on Nov. 4, complaining that dump trucks and concrete trucks stopped operation due to the shortage of urea. The demonstrator demanded that the government be held accountable for the soaring prices of automotive urea, and provide relief plans for workers operating heavy machinery.

Other than restricting hoarding, the government has not yet come up with any effective plans to resolve the crisis.

‘Over-Reliance on China Is A Big Problem’

Because of the unexpected urea shortage and its serious impact, the South Korean government’s policy toward the Chinese Communist Party (CCP) has been criticized.

The Seoul Economic Daily pointed out in an editorial that the chaos of the urea shortage is a man-made disaster caused by over-reliance on China.

“It is sad that only South Korea has been severely hit by the automotive urea turmoil,” the article said, “It can be seen that over-reliance on China is a big problem … South Korea suffered economic retaliation [from China] after the THAAD incident, but failed to reduce its dependence on China. It has been continuing the tightrope policy of depending on the United States for national security and depending on China for economy.”

The author also criticized the government’s slow response, when the CCP banned coal imports from Australia a year ago and restricted urea exports 20 days ago.

“The most important thing is to reduce the degree of dependence on China. If we continue our ‘unrequited love’ with China after being hit every time, we will not be able to avoid economic and security crises,” the editorial warned.

Yoon Seok-youl, presidential candidate for the main opposition People Power Party and former prosecutor general, wrote on his Facebook post: “While China restricted urea exports as early as Oct. 15, relevant department meetings were held on the 2nd of this month. What has the government been doing during this time?”

He stressed that if elected, he will take control over the rare resources and raw materials that are highly dependent on certain countries, and formulate long- and short-term supply and demand countermeasures.