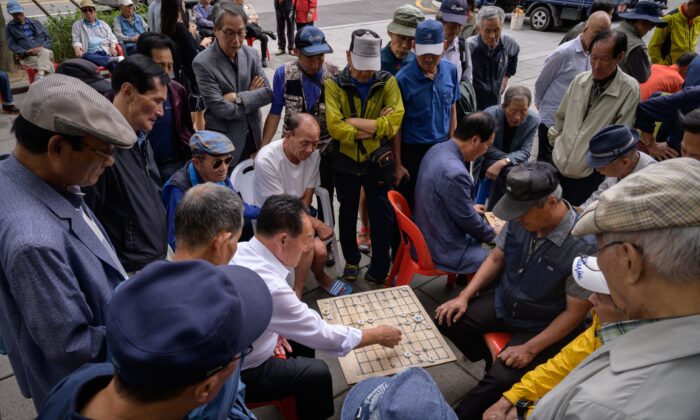 Two men play a board game as they are surrounded by a group of spectators, on a street in Seoul on Sept. 20, 2019. (Ed Jones/AFP via Getty Images)
Asia & Pacific

In South Korea, marriages and birth rates are petering out year by year, resulting in an aged population that is projected to surpass that of Japan and Europe by 2045 and making the country’s aged population proportionally the largest in the world, according to official data.

South Koreans aged 65 and older made up 14.9 percent of the country’s total population in 2019 but will reach 37 percent by 2045, even higher than that of Japan, according to statistics released by the Korea Statistics Office on Sept. 2, 2019.

The office estimated that by 2067, the elderly will represent 46.5 percent of the population, which will mean South Korea will have the largest proportion of elderly people in the world.

The Ministry of Health and Welfare said on Oct.1 that there are currently 10,935 elderly people aged over 100 in South Korea, with 2,012 people newly added this year.

As a result of improved living and medical conditions, South Korea’s life expectancy during 2015-2020 was 82.5 years, compared to the global average of 72.3 years.

In addition, it has had a trend of more deaths than births since 2020. The average number of births per woman of childbearing age in South Korea was 1.24 in 2015 and has dropped every year since, reaching 0.84 in 2020.

It has been estimated that South Korea’s population will decline from 52 million in 2019 to 39 million in 2067, reported Newsis.

Concerns About the Youth

According to a survey conducted by Incruit, a South Korean employment portal, about 30 percent of unmarried people in Korea have no plans to get married, and more than one-third of the respondents said they would not consider having children. Among them, women are reluctant to get married and have children mostly because of the “heavy burden of childbirth and childcare after marriage,” while men are “not financially well-off.”

Seo Hyung-soo, vice chairman of the Korean Committee on Low Fertility and Aging Society, was cited by Newsis saying, “Young people’s perceptions have changed. They think that marriage and childbirth make life more precarious,” and that “it has some limitations if one only relies on government financial support.”

What newly married couples need most is “stability in employment and housing,” said Seo, adding that “the socio-economic systems of education, health, and medical care should all be improved as a whole in light of demographic changes.”