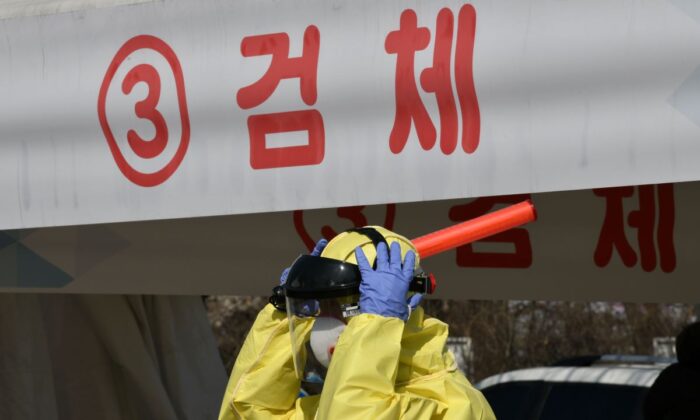 South Korea observed a record daily outbreak of 813 new coronavirus cases, reported on Feb. 29, according to the Korea Centers for Disease Control and Prevention (KCDC).

The country is facing the largest outbreak of coronavirus outside of China with 3,150 confirmed cases of infection and 17 cases of death as of Saturday. Authorities asked people to maintain personal hygiene and keep “social distancing” until the beginning of March, according to a release by the KCDC.

“We have asked you to refrain from taking part in public events, including a religious gathering or protest, this weekend,” Vice Health and Welfare Minister Kim Kang-lip told a briefing.

It was a “critical moment” in reining in the spread of the virus, he said, adding: “Please stay at home and refrain from going outside and minimize contact with other people.”

As of Saturday, health authorities had run tests on 90,905 suspected cases with 8,143 cases scanned in the same day alone.

Those tested include 65,000 trainees of a church in Daegu city after a 61-year-old woman known as “Patient 31” attended religious services there before testing positive.

From Feb. 4 onward, Korean authorities forbade all foreigners with a history of visiting or staying in China’s Hubei province two weeks before the notice from entering the country.

“Through such measures, inbound travelers from China dropped by 60 percent from 13,000 on February 2 to 5,200 on February 8,” said the Korean Ministry of Health in a release.

The authorities are putting more isolation facilities for those infected in cities and provinces and are also imposing a fine of $2,500 (KRW 3 million) or less or imprisonment with labor for one year on those failing to abide by isolation requirements.

Dramatic Rise of Cases in Iran

The outbreak of the new virus in Iran has also been dramatic—the head of Iran’s task force to stop the illness, was seen coughing, sweating, and wheezing across televised interviews before acknowledging he was infected.

Then, days later, a visibly pale official sat only feet away from President Hassan Rouhani and other top leaders before she too reportedly came down with the virus.

In brief remarks from Tehran, he cautioned the number of cases would likely further spike as Iran now has 15 laboratories testing samples.

Reuters and The Epoch Times’ Ivan Pentchoukov contributed to this report.