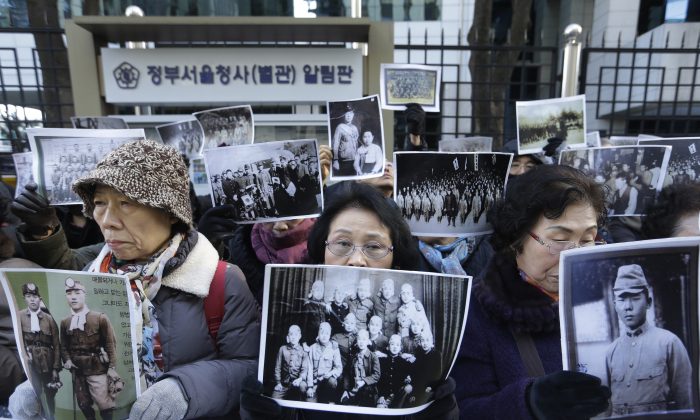 SEOUL, South Korea—An apology from Japan’s prime minister and a pledge of more than $8 million sealed a breakthrough deal Monday in a decades-long impasse with South Korea over Korean women forced into Japanese military-run brothels during World War II.

The accord, which aims to resolve the emotional core of South Korea’s grievances with its former colonial overlord, could begin to reverse decades of animosity and mistrust between the two thriving democracies, trade partners and staunch U.S. allies. It represents a shift for Tokyo’s conservative government and a new willingness to compromise by previously wary Seoul.

A statement by both countries’ foreign ministers said Prime Minister Shinzo Abe “expresses anew his most sincere apologies and remorse to all the women who underwent immeasurable and painful experiences and suffered incurable physical and psychological wounds as comfort women,” the euphemistic name given the women.

Historians say tens of thousands of women from around Asia, many of them Korean, were sent to front-line military brothels to provide sex to Japanese soldiers.

It wasn’t immediately clear if Abe would be issuing a separate written statement or if it would be directly delivered to the 46 surviving former Korean sex slaves, now in their 80s and 90s.

The language mirrored past expressions of remorse by other prime ministers, although it was seen by some in Seoul as an improvement on previous comments by Abe’s hawkish government, which has been accused of whitewashing wartime atrocities.

Another deciding factor was that the 1 billion yen ($8.3 million)—to create a foundation to help provide support for the victims—came from the government, not private sources, something Tokyo has resisted in the past.

Later Monday, Abe called South Korean President Park Geun-hye and reiterated his apology. He said Tokyo would implement the deal and called the issue settled irreversibly. Park said she hoped the two countries will build mutual trust and open a new era in ties based on the agreement.

After phoning Park, Abe told reporters that the agreement was based on his commitment to stop future generations from having to repeatedly apologize.

“Japan and South Korea are now entering a new era,” Abe said. “We should not drag this problem into the next generation.”

Park issued a separate statement saying the deal was the result of her government’s best efforts to resolve the sex slave issue, given its urgency. “Most of victims are at an advanced age and nine died this year alone,” she said.

“I hope the mental pains of the elderly comfort women will be eased,” Park said.

The initial reaction of former sex slaves was mixed. One woman said she would follow the government’s lead, while another vowed to ignore the accord because Tokyo didn’t consider the money to be formal compensation.

“Isn’t it natural to make legal compensation if they commit a crime?” said Lee Yong-su, 88, according to South Korea’s Yonhap news agency.

Some in Seoul saw the deal, while not perfect, as an important step forward.

“If we brushed aside this deal, the comfort women issue would remain unresolved forever,” said Lee Won Deog, director of Institute of Japanese Studies at Seoul’s Kookmin University. “Elderly women would die one by one; South Korea and Japan would engage in history wars and find it harder to improve ties.”

Many South Koreans continue to feel bitterness over Japan’s brutal colonial occupation of the Korean Peninsula from 1910 to 1945. But South Korean officials have also faced calls to improve ties with Japan, the world’s No. 3 economy and a regional powerhouse, not least from U.S. officials eager for a strong united front against a rising China and North Korea’s pursuit of nuclear-armed missiles that could target the American mainland.

The U.S. welcomed the announcement, with Secretary of State John Kerry applauding the two leaders’ “courage and vision.”

“We believe this agreement will promote healing and help to improve relations between two of the United States’ most important allies,” Kerry said in a statement.

The spokesman for the U.N. secretary-general said Ban Ki-moon welcomed the agreement and appreciated the “leadership and vision” of Park and Abe.

Japan appeared emboldened to make the overture to Seoul after the first formal leaders’ meeting between the neighbors in 3½ years, in November, and after South Korean courts recently acquitted a Japanese reporter charged with defaming Park and refused to review a complaint by a South Korean seeking individual compensation for Japan’s forceful mobilization of workers during colonial days.

Seoul, meanwhile, said it will refrain from criticizing Japan over the issue, and will talk with “relevant organizations”—a reference to civic groups representing the former sex slaves—to try to resolve Japan’s grievance over a statue of a girl representing victims of Japanese sexual slavery that sits in front of the Japanese Embassy in downtown Seoul. Yun said South Korea recognizes Japan’s worries about security over the statue, where anti-Tokyo protests take place weekly.

There has long been resistance in South Korea to past Japanese apologies because many here wanted Japan to acknowledge that it has a legal responsibility to the women.

Japanese Foreign Minister Fumio Kishida later emphasized in a closed-door briefing with Japanese reporters that Tokyo doesn’t consider the 1 billion yen as compensation, but “a project to relieve emotional scars and provide healing for the victims.” It will include medical services, health checks and other support for the women, he said. All compensation issues between the countries were settled by a 1965 treaty that restored diplomatic ties and was accompanied by more than $800 million in economic aid and loans from Tokyo to Seoul, he said.

But Kishida said the comfort women system “deeply hurt the honor and dignity of many women under the involvement of the Japanese military at the time, and Japan strongly feels responsibility.”