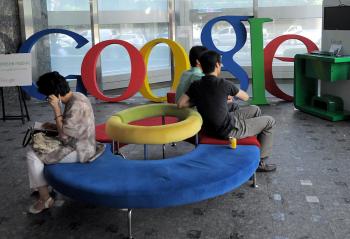 Visitors sit on a bench at a lobby of an office of Google Korea in Seoul on August 11. South Korean police searched the offices of Google Korea to investigate whether it breached privacy law in collecting information for its Street View service. (Park Ji Hwan/Getty Iamges )
Business & Economy

Google is currently being investigated by 37 U.S. states and informally by the Federal Trade Commission for the Street View service, according to Reuters.

Google sends its Street View cars down streets around to globe taking 360 degree photos of the streets for Internet viewers to access. Google was heavily criticized for also simultaneously collecting personal data from unsecured WiFi connections.

Several months earlier, when the accusations first came out, Google's senior vice presidents of engineering Alan Eustace stated on the company's official blog, “We are profoundly sorry for this error and are determined to learn all the lessons we can from our mistake.”

Despite the controversy and international criticism, Google says it still plans to launch the mapping service in Germany, but it will allow residents to apply to have their homes blocked out of the service, according to a report by Der Spiegel August 11.