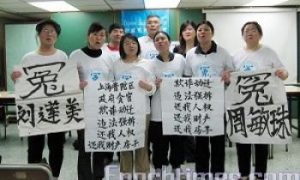 'Chinese League of Victims' Says No to the CCP
0

'This joyful feeling in my heart is very, very beautiful,' Says Taiwanese Writer
0 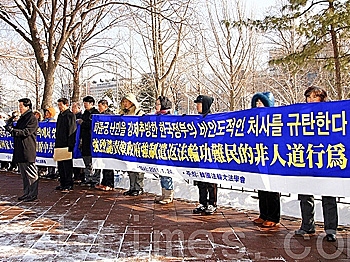 The individuals were all practitioners of Falun Gong, a spiritual practice that is persecuted on the mainland.

The Korean Falun Dafa Association believes the deportations were instigated by the Chinese Communist Party (CCP), who exerts political pressure on the South Korean government.

In this case the deportations were an act of retaliation, they said, because the CCP’s recent attempt to thwart Shen Yun Performing Arts in Korea failed. Shen Yun, a classical Chinese dance company that tours the globe, is hosted and supported by the Falun Dafa Association.

The statements were made on Jan. 24 at an improvised press conference held by the Association in front of the Ministry of Justice. They told the government to resist the CCP’s influence, safeguard Korea’s image, and defend the country’s sovereignty.

During the press conference Ms. Xu, the sister of one of the deportees, said that she found out about the deportation during a phone call with friends and family in China; she was not notified by the South Korean authorities until two days after the deportation, which is not a standard practice.

Ms. Xu said that the Chinese police not only know the identity of those Falun Gong practitioners, but also the details of the activities they engaged in while in Korea. They are thus in grave danger, she said.

Her own case serves as an example. When she went back to China to visit last year she was immediately detained by agents of the “610 Office,” an extrajudicial agency set up to coordinate and carry out the persecution of Falun Gong. She was interrogated for more than five hours.

The Chinese police told her words to the effect of: “We know your activities in South Korea, and the fact that your brother is at the detention center. Our people are over there; we even know all the phone numbers.” They then rattled off the names of the Falun Dafa Association volunteers, she said, apparently in an attempt to intimidate.