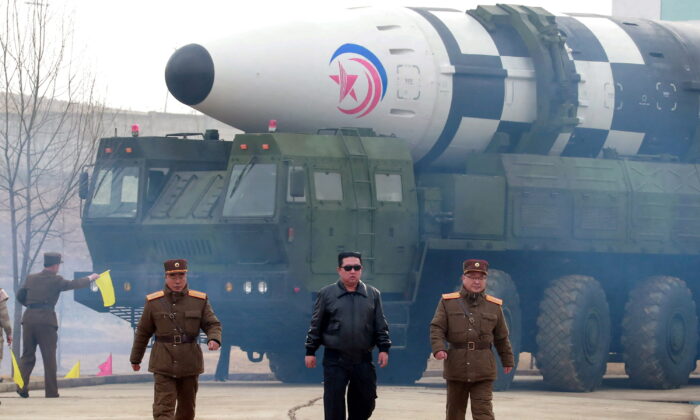 North Korea claimed on March 24 that it test-fired a new type of ICBM, the Hwasong-17, which experts dubbed a monster missile capable of striking anywhere in the United States and beyond. Pyongyang’s state media also released footage of leader Kim Jong Un supervising the launch.

South Korea’s Defense Ministry said it has concluded that the launch didn’t involve a Hwasong-17 but rather a Hwasong-15, an older and smaller ICBM that Pyongyang test-fired in 2017.

The ministry told a parliamentary committee that the missile’s speed, combustion, and stage separation were similar to those of the Hwasong-15.

They also observed that shadow and weather conditions seen in the footage released by North Korean state media suggest the launch occurred on a different date and time.

The ministry claimed that the United States conducted its own investigation into the launch and concurred with the South Korean assessment.

“South Korea and the U.S. intelligence concluded that North Korea’s claim is false, that it was actually Hwasong-15. That’s why we are saying that North Korea is deceiving,” South Korean lawmaker Min Hong Chul told ABC News.

The ministry believes that North Korea’s deception about the launch of Hwasong-17 was likely an attempt to compensate for a failed launch on March 16 that South Korea claimed exploded in the skies after liftoff.

It added that Pyongyang may have intended to deceive its rivals into believing it possessed advanced ICBM technology to solidify its image as a military power and increase its leverage in future negotiations.

Japan, however, maintained its assessment that North Korea had launched a new type of ICBM. Japanese chief cabinet secretary Hirokazu Matsuno said on March 28 that the missile poses a greater threat than any other weapon North Korea has fired.

North Korean state media reported that Kim personally directed the missile launch on March 24 to make the “whole world clearly aware” of the power of his strategic forces.

The North Korean leader vowed to acquire “formidable military and technical capabilities unperturbed by any military threat” and to be “fully ready for a long-standing confrontation with the U.S. imperialists.”

U.S. Ambassador to the United Nations Linda Thomas-Greenfield said on March 25 that Washington would propose a resolution to tighten Security Council sanctions against North Korea, though she didn’t specify what the new sanctions would be.