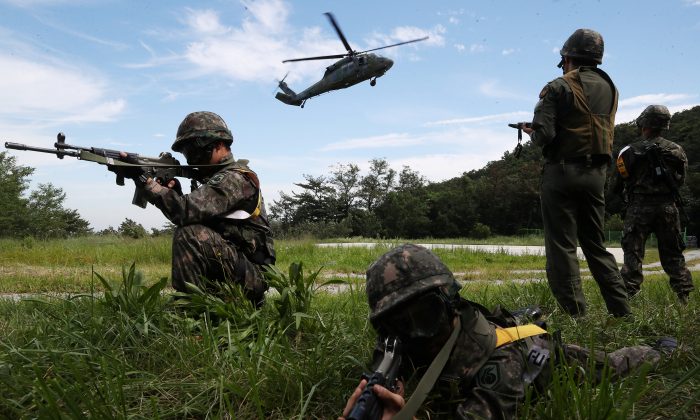 The United States and South Korea on Aug. 22 began their largest combined military exercises to bolster a deterrence posture after years of downsizing their annual drills to make room for diplomacy with North Korea and also because of COVID-19 concerns.

The two allies aim to stage 13 combined field training programs throughout the UFS, according to the report. South Korea’s Defense Ministry said last month that the drills aim to deter “North Korea’s provocations.”

The drills are the largest since 2017 after being scaled back because of COVID-19 and because of efforts at the time by the previous South Korean administration to restart denuclearization talks with Pyongyang, which has denounced UFS as a rehearsal for invasion.

President Yoon Suk-yeol, who took office in May, sought a tougher stance on North Korea and a stronger U.S. security commitment to the country’s defense.

“Maintaining peace on the Korean Peninsula is built on our airtight security posture,” Yoon told a Cabinet meeting on Aug. 22, calling for thorough exercises based on real-world scenarios.

The United States, South Korea, and Japan also participated in a missile warning and ballistic missile search and tracking exercise in Hawaii on Aug. 8–14 to bolster trilateral cooperation amid North Korea’s nuclear threats.

Earlier this month, Yoon offered to provide Pyongyang with what he called an “audacious plan” that would “significantly improve North Korea’s economy and its people’s livelihoods in stages” in exchange for complete denuclearization.

“We will implement a large-scale food program; provide assistance for power generation, transmission, and distribution infrastructure; and carry out projects to modernize ports and airports for international trade,” he said.

“We don’t like Yoon Suk-yeol himself,” Kim Yo Jong, the sister of the North Korean leader, was quoted as saying by the state-run Korean Central News Agency on Aug. 20.

Kim criticized Yoon’s offer as “pipedream-like remarks” with “the height of absurdity as it is an impracticable one,” calling the effort to barter economic cooperation for nuclear weapons “childish.”

“No one barters its destiny for corn cake,” she said. “Bitter contempt is what we will only show those spinning a pipedream to succeed in making us abandon our nukes if they pay more stakes.”

North Korea has conducted a series of missile launches this year, including one involving its largest intercontinental ballistic missile, the Hwasong-17, all of which are banned under U.N. Security Council resolutions on Pyongyang’s missile program.

South Korea has been pushing for a formal declaration to end the 1950–53 Korean War to ease tensions on the Korean Peninsula. The two countries agreed to an armistice in 1953.

But North Korea insists that any formal treaty to end the war must first be preceded by an end to U.S. “hostilities” against it. Washington has reiterated that it holds “no hostile intent” toward Pyongyang and expressed willingness to discuss with North Korea without preconditions.