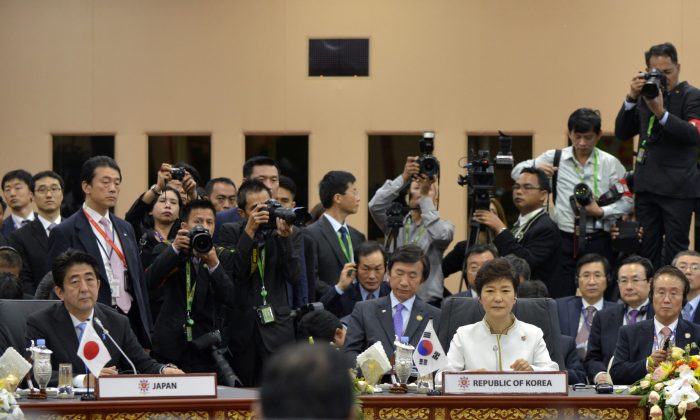 South Korea’s President Park Geun-hye, looking frosty and gazing in the opposite direction, ignored Japanese Prime Minister Shinzo Abe standing next to her at the Oct. 7 APEC meeting in Bali. The two leaders barely exchanged greetings, according to a Japanese news dispatch, and kept their contact to a minimum, “only for a few seconds.”

The awkward encounter was emblematic of widening gulf between two crucial East Asian neighbors, unable to settle age-old differences over past history, even as their security environment worsens with China’s territorial assertiveness and North Korea’s nuclear and missile threats.

But it was not just bilateral issues dividing them. Broadening U.S. security ties with Japan is fueling resentment in South Korea that the United States is eroding Seoul’s strategic options by beefing up Japan. The Oct. 3 U.S.–Japanese agreement to revise their defense cooperation guidelines next year has raised the specter of Washington drastically strengthening Japan’s independent military capability.

This prompts concerns in Seoul that Japan, an ancient foe, may assume greater responsibility for regional defense on behalf of the United States. South Korea analysts fear that their country might once again become the proverbial shrimp caught between two Asian whales—Japan and China.

Such a prospect evokes unpalatable memories of Japanese invasions, occupation, and brutalities—smack in the face of nuclear threats from the North. Increased Japanese responsibility not only augurs negatively for Seoul’s independent strategic space, but also interferes with Seoul’s attempt to forge stronger ties with China and use Beijing’s leverage in containing North Korea’s nuclear capability.

The United States is shifting more responsibility to South Korea, too.

During his four-day trip to Seoul for assessment of North Korea’s military capability, U.S. Defense Secretary Chuck Hagel announced a series of steps that would bolster the bilateral military alliance. His visit came against the backdrop of an increasing U.S. commitment for the defense of South Korea, which hosts 28,500 U.S. troops.

In their assessment of South Korean capability, Hagel and Korean Defense Minister Kim Kwan-jin came close to agreement on delaying the transfer of command authority of the combined forces to a Korean general in 2015. They also signed a new “strategic framework” authorizing what Korean officials described as “pre-emptive attack” on the North’s nuclear facility in the event of a nuclear or missile attack against the South.

Then, Hagel traveled to Tokyo on Oct. 3. Joined by U.S. Secretary of State John Kerry, Hagel signed an agreement calling for revision of the U.S.–Japan Defense Cooperation guidelines next year. The Obama administration did not consult Seoul on the decision to beef up the Japanese military capability.

The angst in Seoul was exacerbated by the fact that the agreement came amid the Abe government seeking what it called collective self-defense, which would allow Japan to consider an attack on its ally as attack on itself. That not only would make Japan a significant military force in the region, it would necessarily involve reinterpretation of Article 9 of the Japanese Constitution that prohibits its rearmament.

The new guidelines clearly target North Korea with its nuclear arms and missile launches. Although China wasn’t mentioned in the agreement, the guidelines suggest that China is becoming a new source of tension for Japan over territorial claims for nearby islets called Senkaku by Japan and Diaoyu by China.

The prospect of being sandwiched between the military superpower of China to the north and an unrepentant former colonial power, newly arming itself with help from the United States, discomfits Seoul. The strategy also interferes with President Park’s policy of forging better relations with Beijing, which has considerable leverage over North Korea. At the same time, China is also a massive economic partner for South Korea, claiming a quarter of the country’s global trade volume.

In contrast to frosty relations with Tokyo, Chinese President Xi Jinping at APEC offered more assurance of China’s involvement in keeping North Korea under control. Meeting on the sidelines of summit, Xi assured Park that China not only banned a long list of export items that the North could use for developing its nuclear weapons technology, he declared Beijing stood “resolutely” against another nuclear test by the North. Indeed, he promised, China will scrupulously adhere to the U.N. Security Council resolution keeping North Korea under strict sanctions.

In short, China is going an extra mile to woo South Korea, in the hope of keeping the latter neutral if not on its side in the current competition for influence in East Asia.

South Korea is disconcerted over the U.S. policy of beefing up U.S.-Japan alliance without regard to Seoul’s geopolitical interests. When Hagel met with Park on Oct. 1 and asked if it wasn’t time for Seoul to mend relations with Tokyo, Park is reported to have sharply responded: “I understand the importance of Korea-Japan relations, but it’s Japan that’s constantly rubbing salt in our wounds (of past history).”

The testy response notwithstanding, she has little choice. She cannot reject U.S. or Japanese overtures at this stage unless Beijing takes full control of forcing Pyongyang to give up its nuclear arms. Nor is it wise for Seoul to try and keep Tokyo and Washington apart in the face of Beijing’s aggressive territorial stance. A good indication of this strategic dilemma was Seoul’s agreement to hold a trilateral military exercise in Korean waters, Oct. 8–10, involving the aircraft carrier USS George Washington and warships from Japan and South Korea.

For all that, the prospect of cobbling a strong trilateral alliance will not be smooth. Seoul is suspicious of Washington’s design of giving Japan a bigger role in the defense of East Asia. A lingering suspicion here is that Washington is building Japan as the next defense linchpin as the United States faces steady cuts in defense spending. “The U.S. is outsourcing its anti-China policy to Japan,” announced a front-page headline in the conservative Chosun Ilbo newspaper on Oct. 6, shortly after Hagel’s Tokyo agreement.

South Korean officials here are particularly unhappy over Hagel’s failure to notify them in advance about signing the defense guidelines in Tokyo. “The situation is really messy,” says Park Jin, former parliamentary foreign affairs committee chairman, commenting on Seoul’s dilemma. Instead of unilaterally beefing up Japan’s military capability, he thinks the United States should have worked harder to bring Japan and South Korea closer by soothing old historical wounds.

One straightforward apology on the issue of “comfort women”—women and girls forced into prostitution for Japanese troops during World War II—would go a long way to improve the bilateral situation, he says. “We were hoping President Obama to take up this role of an honest broker before [these] Tokyo guidelines,” said Park Jin.

He was not alone in expressing the fear that the United States is relinquishing its leadership role in the face of ongoing budgetary constraints.

Shim Jae Hoon is a Seoul-based journalist. © 2013 The Whitney and Betty MacMillan Center for International and Area Studies at Yale