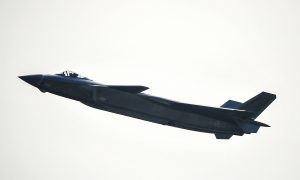 Semiconductors are seen on a circuit board that powers a Samsung video camera at the Samsung MOBILE-ization media and analyst event in San Jose, California, on March 23, 2011. (Justin Sullivan/Getty Images)
Chinese Regime

Beijing has adopted a state-led approach to fulfill its ambition to dominate the global semiconductor industry.

In 2015, Beijing announced its industrial plan of “Made in China 2025,” which set the goal for China to self-fulfill 70 percent of its semiconductor needs by 2025. It currently relies heavily on chip imports, due to lagging behind on manufacturing technology.

Traditional semiconductor powerhouses such as Japan, South Korea, Taiwan, and the United States have long expressed concerns about Beijing’s theft of intellectual property (IP), as well as aggressive poaching of staff from top semiconductor firms in those countries, in order to fulfill its ambitions.

Both South Korea and Japan have recently taken measures to safeguard their respective semiconductor industries against China.

The Korea Semiconductor Industry Association, in a position paper sent to two members of South Korea’s National Assembly, requested that the unicameral legislature make amendments to the country’s laws to more heavily penalize and better prevent industrial technology leaks, according to a May 18 report by South Korean newspaper The Dong-a Ilbo, citing unidentified people in the semiconductor industry.

South Korea’s “Act on Prevention of Divulgence and Protection of Industrial Technology” currently stipulates that any person who commits offenses, such as theft, to obtain an industrial technology and use the technology in a foreign country, will be subject to imprisonment for a maximum of 10 years or a maximum fine of one billion won (about $838,000).

Hong Il-pyo, who is head of the assembly’s Trade, Industry, Energy, SMEs (Small-Medium Enterprises), and Startups Committee, was one of the lawmakers who received the paper.

The association wrote that, “Notably, Korea should introduce strong disciplinary measures, including introduction of penalties for leaking national core technologies to foreign countries and relative infringement.”

China has long acquired South Korean semiconductor, display, and automobile manufacturing technology through underhanded tactics that resulted in major losses for those industries. Dong-a Ilbo criticized the National Assembly for making little progress in pushing for legal changes to prevent such IP theft.

The leak of Korean technologies began more than a decade ago. In 2005, South Korean prosecutors stopped stolen semiconductor technology at Hynix Semiconductor from being leaked to China, after indicting seven individuals for executing a scheme to steal trade secrets, according to a separate article by Dong-a Ilbo.

The leader of the scheme was a retired employee from Hynix surnamed Kim, who asked six of his former co-workers at Hynix to steal chip manufacturing design documents, with the aim of taking the IP to build a semiconductor factory in China. Kim also set up a shell company named LMNT in the Cayman Islands.

Among the six was a Hynix manager surnamed Woo, who successfully stole 15 CDs containing semiconductor technology. He joined LMNT after accepting a salary from Kim that was at least $16,500 more than Woo’s annual salary at Hynix.

It isn’t known if Kim secured any financial assistance from Chinese entities that would have allowed him to build a factory in China.

And in November last year, South Korean prosecutors in Suwon District indicted nine people on suspicion of leaking Samsung Electronics’ flexible display technology to a Chinese company. The nine were employees at a Samsung supplier.

Meanwhile, the Japanese government is contemplating amending its Foreign Exchange and Foreign Trade Act, which would add 20 more sectors to an existing list of sensitive sectors that restrict foreign investments on national-security grounds, according to a May 9 report by Japanese media Nikkei.

The 20 new sectors are expected to include integrated circuits, semiconductor memory devices, software developers, and data processing services, according to Nikkei. The current sensitive sectors include aircraft, nuclear equipment, and weapons.

Nikkei, without citing a source, said the government aims to implement such changes by the end of this year, with the goal of preventing crucial technology from being leaked.

“China is assumed to be the main target of the policy,” Nikkei wrote.

The Japanese government also is considering a framework to further restrict exports of advanced technologies such as artificial intelligence and robotics, following similar measures by the United States to enact export controls aimed at China, according to a May 20 article by Nikkei, citing an unidentified government official.