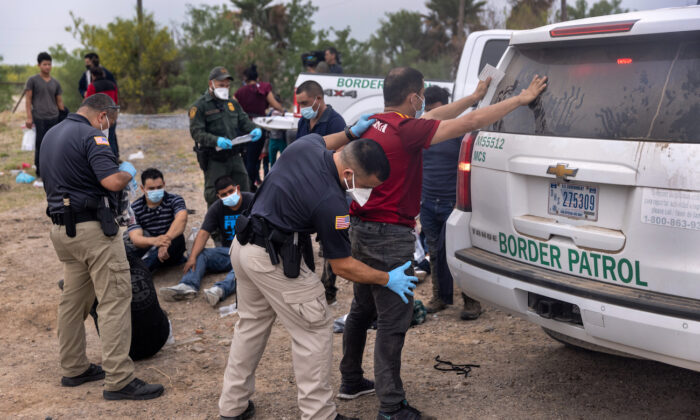 A transport officer searches immigrants before bussing them to a processing center after they crossed the border from Mexico in La Joya, Texas, on April 13, 2021. (John Moore/Getty Images)
Immigration & Border Security

The Republican governors of South Dakota and Iowa said in recent announcements they will be sending law enforcement personnel to the U.S.–Mexico border. It comes after the governors of Texas and Arizona asked all other states to help with the ongoing border crisis by providing additional manpower.

“Tomorrow morning I’m officially announcing up to 50 National Guard troops to Texas to help secure our border,” Noem announced on Twitter. “The Biden administration has failed to keep America safe. We shouldn’t be making our own communities vulnerable by sending police to fix Biden’s border crisis.”

Noem’s announcement comes several days after the office of Iowa Gov. Kim Reynolds announced that Iowa State Patrol officers will be deployed to help with border security efforts. The move was in response to a June 10 request from Texas Gov. Greg Abbott and Arizona Gov. Doug Ducey for more law enforcement manpower.

South Dakota and Iowa now join Florida, Nebraska, and Idaho in committing to send law enforcement to the southern border to help Texas and Arizona.

Abbott and Ducey wrote in their letter, “With your help, we can apprehend more of these perpetrators of state and federal crimes, before they can cause problems in your state.” The letter asserted that under a mutual agreement between states, the Emergency Management Assistance Compact, any officers that states send to Texas or Arizona will be given “the same power … duties, rights, and privileges as are afforded forces of the state in which they are performing emergency services,” which will “include the power to arrest migrants who illegally cross the border into our territory.”

“My first responsibility is to the health and safety of Iowans and the humanitarian crisis at our nation’s southern border is affecting all 50 states,” Reynolds said in a statement on June 24.

“The rise in drugs, human trafficking, and violent crime has become unsustainable. Iowa has no choice but to act, and it’s why I am honoring Texas’s Emergency Management Assistance Compact following assurances from the Iowa Department of Public Safety that it will not compromise our ability to provide all necessary public safety services to Iowans.”

The Iowa governor’s office on June 24 noted that there has been a marked increase in drug trafficking seizures in the state, in particular of methamphetamine and fentanyl, since May last year.

“In Iowa, law enforcement officials are recovering drugs, illegal narcotics, and weapons being smuggled across the nation’s southern border by drug cartels,” the office announced.

Reynolds’s office also acknowledged that the Iowa National Guard is currently carrying out a mission with 24 soldiers from Unit 2/34 IBCT to help law enforcement at the southern border. The mission was in response to a request from the federal government under the Trump administration in October 2020.

According to data from U.S. Customs and Border Protection, there were 180,034 border crossings in May—the largest number in two decades.