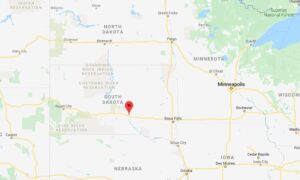 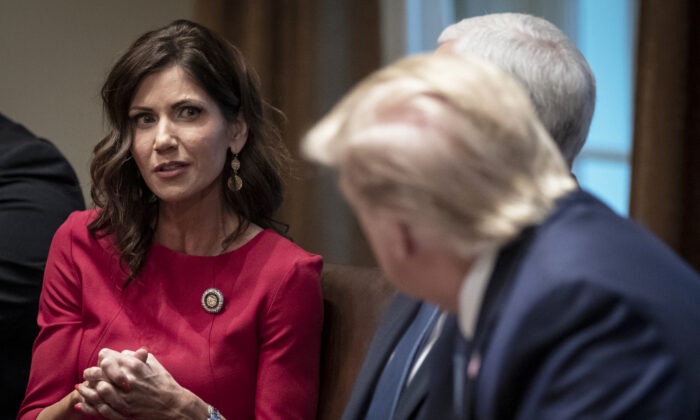 (L-R) Governor of South Dakota Kristi Noem speaks as President Donald Trump listens during a meeting about the Governors Initiative on Regulatory Innovation in the Cabinet Room of the White House in Washington on Dec. 16, 2019. (Drew Angerer/Getty Images)
AMERICA

South Dakota Gov. Kristi Noem on April 23 pushed back against critics and defended her “unconventional” decision to not implement a statewide lockdown amid the the CCP virus pandemic.

Noem said Wednesday that despite South Dakota remaining open, the state has not seen a significant surge in cases of the CCP (Chinese Communist Party) virus—commonly known as novel coronavirus—as suggested by several projections.

She said the state has slashed the number of cases by 75 percent of the projections without issuing a stay-at-home order. As of Wednesday, South Dakota had recorded 1,858 cases of the virus and nine deaths.

More than half of the cases have been linked to an outbreak in Sioux Falls at a Smithfield pork processing plant, where 783 employees and 206 of their close contacts have tested positive.

Noem said in a statement released last week that staff at the Department of Health and chief medical officials from Avera, Monument, and Sanford had updated the state’s projections showing a further flattening of the curve.

“In total, thanks to the diligence of South Dakotans, we’ve cut our peak hospitalization projections by 75 percent,” she said on April 17.

This week, the Republican governor told Breitbart, “I think we’ve got maybe 60 people in the hospital right now. We have 2,500 beds set aside for COVID-19 patients, but we only have 63 in.”

The governor, however, still expects a peak in the state sometime in June, with 30 to 70 percent of the state’s roughly 880,000 population, or up to 600,000 people, testing positive for COVID-19, the disease caused by the CCP virus. This includes those who display mild symptoms, or none at all, she said.

“We probably, from all of our projections and studying the science behind the virus, we won’t peak until the middle of June. But we already have done much better than what we had thought would have been hitting our state already,” Noem told Breitbart.

Noem told the news outlet that she values the “freedoms and liberties” of South Dakota citizens, and believes that they will follow the recommended guidelines to curb transmission of the CCP virus without the implementation of more draconian lockdown measures.

“I trust my people,” Nom said, admitting that her decision was “unconventional” and “something that would not be widely embraced across the country.”

She suggested that other officials “take too much power in a time of crisis,” adding that she “took an oath to uphold our state Constitution.”

“I think that’s how we directly lose our country someday, by leaders overstepping their proper role,” she continued.

The governor added that she is “super proud” of the state which has managed to prevent its CCP virus cases from spiking by following social distancing and hygiene measures.

“We already have cut our peak projections by 75 percent just putting in place the recommendations I asked people to do, staying at home and they’ve practiced social distancing,” she explained. “They’ve washed their hands and they stayed home if they weren’t feeling well and called their doctors.

“They recognized that I wasn’t going to dictate to them, that I valued their freedoms and liberties and that I was going to let them take action on behalf of their families and communities.”

Noem’s leniency in allowing businesses to stay open is being tested by a pair of motor racing events planned for this weekend. The races expect to attract hundreds of spectators on Saturday and Sunday nights.

Although race organizers are planning to space people out and implement other measures to prevent CCP virus infections, Noem said she thinks the races are a bad idea. Still, she said she would not be taking legal action to stop them from happening.

The two race tracks, just over the border from Iowa, decided to sell limited tickets to give race fans a taste of “normalcy” after weeks of social distancing and canceled sporting events.

The Saturday race at Park Jefferson International Speedway has sold out of the 700 tickets it offered to a track that usually holds 4,000. The Sunday event at New Raceway Park in Jefferson is offering 500 tickets, less than one-third of its capacity of 1,800. Organizers said they would offer refunds to anyone with second thoughts about going.

Meanwhile, President Trump this week said that 20 states plan to reopen as the United States passes its modeled peak of the CCP virus outbreak.

“We are opening up America again,” Trump said during a White House press briefing on Tuesday. “Twenty states, representing 40 percent of the population, have announced they are making plans and preparations to safely restart their economies in the very near future. Three announced today.”

Idaho Gov. Brad Little on Thursday announced that the state will be gradually reopening in four stages, while the governors of Montana and Oklahoma on Wednesday announced their intentions to reopen the state.

Leading experts, however, have warned that states which reopen too soon may experience a surge in infections.

“The math is unfortunately pretty simple. It’s not a matter of whether infections will increase but by how much,” Jeffrey Shaman, a leading epidemiologist at Colombia University told The Washington Post.