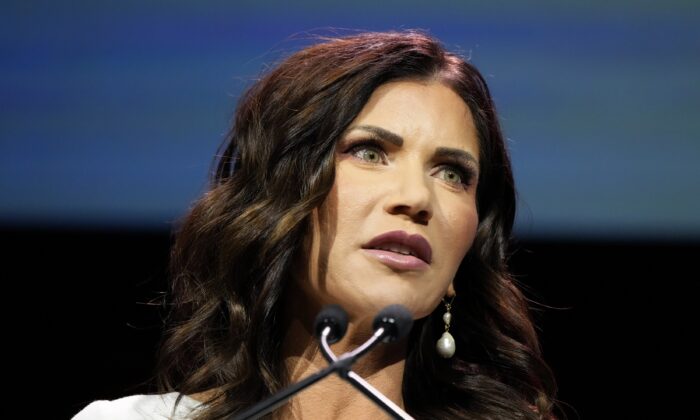 South Dakota’s attorney general is looking into a meeting Gov. Kristi Noem had with her daughter and top officials last year.

“I have been contacted by concerned citizens and legislators. I am actively reviewing their concerns and I will be following the steps prescribed in codified law in relation to those questions,” South Dakota Attorney General Jason Ravnsborg, a Republican, told The Epoch Times in an emailed statement.

The wire outlet reported that Noem, her daughter Kassidy Peters, and South Dakota Labor Secretary Marcia Hultman met in her office in July 2020 with Sherry Bren, a state worker who was overseeing Peters’ application to become an appraiser.

Bren had moved to deny Peters her license but about four months after the meeting, she received it.

Noem and her office have pushed back on the reporting on the meeting.

“The Associated Press is disparaging the Governor’s daughter in order to attack the Governor politically—no wonder Americans’ trust in the media is at an all-time low. South Dakota is open for business. We won’t allow bureaucratic red tape to get in the way of South Dakota’s sustained economic growth. Having more quality appraisers in the market will help keep our housing market moving and home prices down,” Ian Fury, Noem’s communications director, told The Epoch Times in an email.

Noem, a Republican, told Newsmax on Tuesday that her daughter “received no special treatment.”

“She did exactly what every other person did, applying and receiving an appraisers license in the state of South Dakota,” Noem said. “This is another political attack.”

Bren later filed an age discrimination complaint and left her job after the state agreed to pay $200,000 in exchange for her withdrawing it, Noem noted. She described Bren as a “disgruntled employee” who made “innuendos” to the Associated Press.

“I signed up for this job. I get it. They’re going to attack me and I realize that,” the governor added. “Now they’re going after my kids and trying to destroy my kids. There was a point in time where people didn’t do that. I realize we’re in new territory today.”

Noem has not denied the meeting took place, nor did the South Dakota Department of Labor and Regulation.

A spokesperson for the agency told The Epoch Times in an email that the agency makes sure there are plenty of quality appraisers in South Dakota.

“Kassidy Peters went through the same process as other appraisers. There was no denial,” the spokesperson said. “Mrs. Peters completed the requirements to become licensed, and she was subsequently certified in November. The Department is not going to discuss the specifics of personnel decisions.”