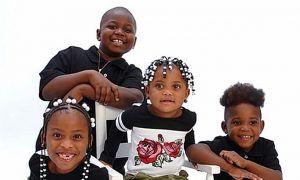 A South Carolina mother was killed in front of her daughters while trying to push her SUV off the road after it broke down.

Leisa “Bunni” Johnson, 29, was pinned under her vehicle when it rolled over her.

Police in Spartanburg responded to a report of a person pinned under a vehicle around 1 a.m. on New Year’s Eve.

One of the victim’s daughters told police officers that the SUV broke down and her mother was trying to push it off the road when she was pinned.

One of the daughters used her mother’s phone to call for help.

By the time officers arrived, Johnson was unresponsive, trapped under the vehicle off the roadway in the grass.

One of the children told officers, “My momma died,” according to WYFF.

Family members said that the death was a tragic accident.

“It’s just one of those things…an accident,” Johnson’s uncle Brian Johnson told WSPA. “I hate it.”

The daughters are five and three.

Family members said that Johnson took good care of her daughters and that the girls saw their mother under the car.

“It’s going to be a struggle, you know, from the beginning, especially with them kids seeing that with (their) mom and stuff,” Johnson’s aunt Sheila Rookard said. “Y’all just pray for us.”

A victim’s advocate was called to the scene to assist the children, WYFF reported.

The Spartanburg County Coroner’s office and Spartanburg Police were investigating the death and an autopsy was planned.

Californian authorities have arrested a mother suspected of forcing her 8-year-old daughter to crawl under a freight train so that the family could catch a bus.

Joy France Collins, 44, was arrested on Dec. 17, Fresno police said, after her daughter, Joyanna ( also written as Joy Anna) Harris was killed when she crawled under the idling train.

Joyanna’s 9-year-old brother had already successfully crawled under the train, police chief Jerry Dyer said, according to Fox, adding that Joyanna was hesitant to go.

“Upon being encouraged by the mother to cross the track, she too made her way underneath the rail car and attempted to get to the other side,” Dyer said.

The mile-long train had stopped for 12 seconds and was reportedly blocking the family’s route to a bus that Collins wanted the family to catch. She had made the children take such measures in the past, authorities said.

But as Joyanna was trying to cross the tracks, the train suddenly lurched forward, the girl was trapped underneath and dragged 500 feet before her mother was able to free her.

The 8-year-old died at the scene from her injuries.

Fresno resident David Hunt told ABC30, “There was nothing that could prepare me for what I’ve seen.”

He added, “My head is still spinning trying to grasp what was going on. Other than that I’m thanking God that my kids all made it home tonight.”