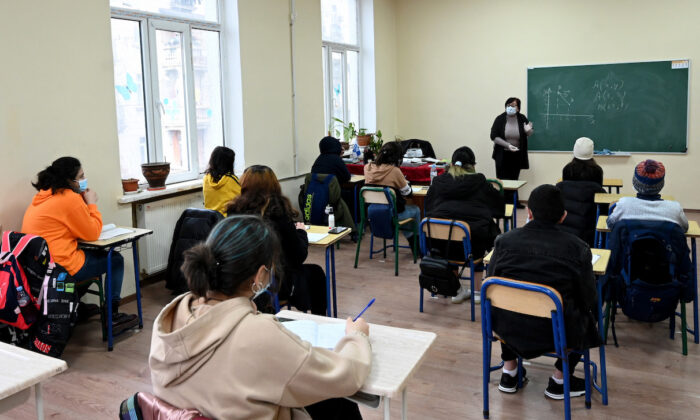 Schoolchildren wearing face masks listen to a teacher at a school in Tbilisi, Georgia on Feb. 15, 2021. (Photo by Vano Shlamov / AFP) (Photo by VANO SHLAMOV/AFP via Getty Images)
Regional News

After a filmed incident in which a school resource officer warned a parent that he will call the Department of Social Services (DSS) if the parent left his child at school, McMaster formally requested that CCSD not use state funds to enforce its mask policies.

“Numerous media outlets have recently documented the methods being employed by the [CCSD] to enforce the district’s mandatory mask mandate,” McMaster said in a Sept. 24 press release. “Among other things, I am concerned that the district’s aggressive use of school resource officers may inadvertently create unhealthy, erroneous, and negative stereotypes of law enforcement officers, especially among our young children.”

McMaster addressed his request to Eric Mack, the chairman of the CCSD Board of Trustees, the district within which the James B. Edwards Elementary school in Mount Pleasant, South Carolina, operates.

In the video taken at the elementary school on Sept. 22, the school resource officer tells the person filming that he will call the DSS, while the parent asks why his “kids can’t be here today.”

According to a press release from the Mount Pleasant Police Department (MPPD), the resource officer is identified as Ransom Walters, who was assigned to the school.

The MPPD said the officer became involved after the parent was asked to leave the school because his children were not wearing masks.

“If a parent abandons a child in any situation, notifications can be made to DSS so arrangements can be made for the child’s safety,” the MPPD said.

The MPPD said that the video shared on Facebook “was not of the entire interaction,” and that a review of the officer’s body camera showed the officer telling the parent must leave at the request of the school staff.

“If the parent left the children, then DSS would be called because of the children being left unattended at the school,” the MPPD said. “The situation was handled administratively between the parents and Charleston County School District, and the children were taken home by a parent.”

Mask policies are enforced using a reserve fund, which Pruitt said is money accumulated over time, not from the current state budget.

On Sept. 16, Mack said in a CCDS press conference that the CCDS Board of Trustees voted to mandate masks for employees, students, and visitors in all schools and on school buses beginning on Sept. 20.

“Students will be given a reasonable opportunity to comply,” Mack said. “However, those who continue to refuse will not be allowed to attend class with students who are wearing facemasks.”

To not violate state law, Mack said, CCSD is looking at how to implement the mask mandate without using state funding “in order to comply with South Carolina’s budget proviso 1.108.”

“We are working on the logistics of paying the salaries of all persons charged with enforcing this policy from moneys that do not impugn any state funds appropriated from the school funding allocations for the 21/22 school year,” Mack said.