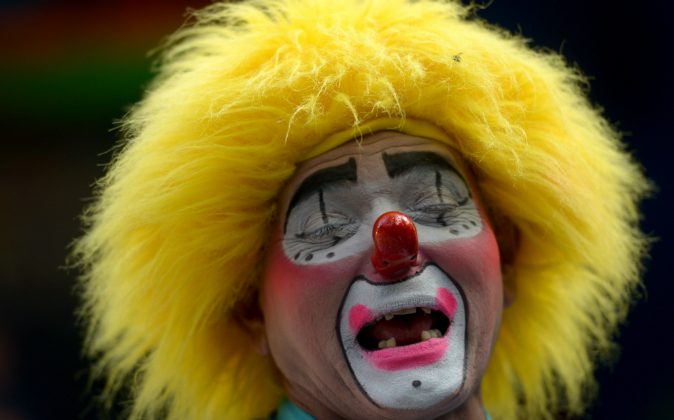 The Greenville Police Department and city residents are on high alert after multiple clown sightings, raising parents’ fears for the safety of their children.

Parents are on edge following reports that clowns are attempting to lure children into the woods. The first clown sighting was on Aug. 21 at the Fleetwood Manor Apartments in Greenville County, South Carolina, reported Fox Carolina.

A woman reported to authorities that she was standing outside of her apartment at 8:30 p.m. when her son said he had seen “clowns in the woods whispering and making strange noises,” according to a report obtained by CBS 48 Hours’ Crimesider.

The woman said her son guided her towards the direction of the clowns, where she saw them “flashing green laser lights” before the clowns fled into the woods. She also said that her older son heard “chains and banging on the front door of their residence.”

However, an investigation of the trail in the woods yielded no evidence.

“They were not able to substantiate those claims through any kind of evidence at that time, and have not,” Greenville County Sheriff’s Office Master Deputy Ryan Flood said Thursday.

The property management sent a letter to its occupants on Aug. 24, urging them to maintain vigilance after receiving complaints of the clowns, reported Fox Carolina.

“First and foremost at Fleetwood Manor Apartments childrens [sic] safety is a top priority,” read the letter. “At no time should a child be alone at night, or walking in the roads or wooded areas at night.”

The letter also stated a 10 p.m. curfew was implemented to ensure the safety of residents.

Since Aug. 21, there’s been additional reports of clown sightings in the Greenville area.

Some children claimed that clowns used “large amounts of money”as an incentive to get them to follow them. The children claimed the clowns lived in the area in “a house located near a pond at the end of a man-made trail in the woods,” according to the police report.

Again, an investigation turned up no evidence.

More clowns were spotted at Emerald Commons Apartment Complex and Shemwood Apartments in Greenville shortly before 10 p.m. on Aug. 29. A 12-year-old told authorities that a person was in the backyard photographing children.

The following night, after being chased by children, two clowns jumped into a waiting car driven by another clown. The car is described as a newer-model black Honda.

The most recent sighting occurred on Aug. 31 as a woman did her laundry at Park Haywood Apartments. She described the person as wearing a white swimmer’s cap with neon or red hair coming out of the sides, and white face paint with a black painted line starting between his eyebrows and ending at his upper lip, according to WSPA. She said the clown was between 35 and 45 years old, 5 foot 10, and slightly overweight.

Miller isn’t sure of the motives of the clowns—whether if it’s connected to the new film, “31” or to “somewhat politely terrorize the public,”—but he wants the shenanigans to end.

South Carolina has a law that prohibits anyone over the age of 16 to dress up as a clown.

“We will charge you because you’re creating a disruption in our community and you’re creating fear and concern,” Miller said. “We want to encourage people who may be inclined to dress in clown outfits, not to do it.”

Master Deputy Ryan Flood urged residents to call police “if you see anything suspicious, anyone dressed up in a clown costume” and to take photos of the suspect.