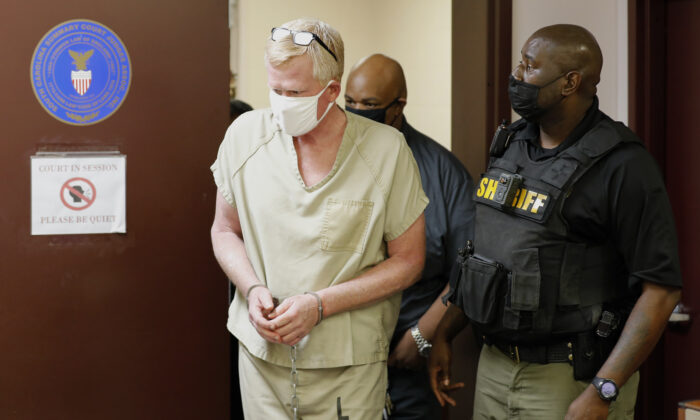 COLUMBIA, S.C.—Prominent South Carolina attorney Alex Murdaugh, who faces more than 70 criminal charges after police scrutinized his finances in the aftermath of the unsolved shooting deaths of his wife and son last year, is likely going to permanently lose his law license.

The South Carolina Supreme Court said Murdaugh’s attorneys said Tuesday they would not contest any arguments scheduled for a disbarment hearing Wednesday. As a result, the justices canceled the proceedings.

The decision likely ends the legal career of a member of a prominent family that has dominated the legal scene in tiny Hampton County for nearly a century. Murdaugh’s father, grandfather and great-grandfather were the area’s elected prosecutors for 87 years straight.

Alex Murdaugh once worked for the family-founded law firm, which discreetly boasted of securing million-dollar verdicts for accidental deaths, product liability, or workplace safety cases. The firm said in September that Murdaugh was stealing money.

Chief Justice Don Beatty said in court papers last week that Murdaugh’s own admissions in civil cases and statements by his lawyers in bond hearings leave no doubt he stole money from clients and had lied to the authorities and should be disbarred. That’s even as no arrests have been made in the June 2021 killings of Murdaugh’s wife, Maggie, and son, Paul, at a family home in Colleton County.

A statement from Beatty on Tuesday said a formal order on disbarment will be issued later.

Beatty left no doubt in his order last Thursday where he falls on what should happen to Murdaugh’s law license.

“In this unique case, Respondent’s admissions in the public record lead to only one conclusion—that Respondent’s egregious ethical misconduct subjects him to the most significant sanction available—disbarment,” Beatty wrote.

The deaths of his wife and younger son prompted at least a half-dozen investigations into Murdaugh and his finances that resulted in indictments against him. Murdaugh is facing charges he stole $8.5 million from people who hired him and that he lied to police in saying he was shot by a stranger on a roadside when—officials say—he really asked a friend to kill him so his surviving son could collect a $10 million life insurance policy.

Anything Murdaugh or his attorneys said before the state Supreme Court could have been used against him in criminal cases or additional investigations.

A number of other former clients have accused him of stealing from them, leading to dozens of criminal indictments. Murdaugh signed a civil settlement saying he is responsible for taking more than $4.3 million from insurance settlements meant for the family of his housekeeper Gloria Satterfield, who Murdaugh said died after a fall in the family’s home.

Meanwhile, the anniversary of the June 7, 2021, deaths of Murdaugh’s wife, Maggie, 52, and son, Paul, 22, passed with no arrests and no additional information from the State Law Enforcement Division. Its agents have revealed little beyond the fact that the two were shot outside their Colleton County home and Murdaugh called 911, saying he discovered the bodies.

Murdaugh’s lawyers continue to insist he had nothing to do with the killings, saying he was visiting his mother and ailing father when his wife and son were killed.

State police also are investigating other unusual deaths around the Murdaughs and plan to exhume Satterfield’s body. Murdaugh reported she was gravely injured in a fall, dying later in the hospital. But the coroner’s office said it was not informed of her death like it should have been for anyone who dies under unusual or suspicious circumstances.

State police also are looking at an unsolved death that was ruled a hit-and-run on a Hampton County road in 2015. The 19-year-old victim’s mother said she thought Paul Murdaugh could have been involved.

A judge has frozen Murdaugh’s assets as a number of civil lawsuits make their way through the courts, including some on behalf of the family of a 19-year-old woman killed and others on board Murdaugh’s boat in February 2019 when it crashed into a bridge pier. Police charged Murdaugh’s late son with boating under the influence.