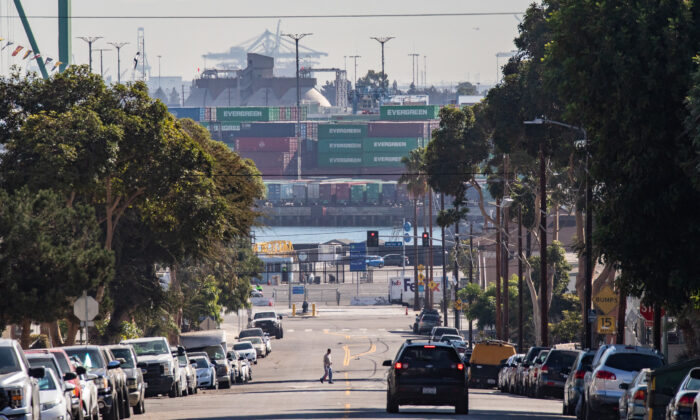 South Bay residents voiced concerns about the backlog of goods off the Southern California coast and their opinions on President Joe Biden’s order, announced Oct. 13, that the Port of Los Angeles work around the clock to help ease the current supply chain crisis, brought on, in part, by measures taken amid the pandemic.

Dave, a resident of Carson, who didn’t want to provide his last name, said he has noticed more trucks stuck on freeways due to the backlog.

“It’s all trucks, one truck after another,” he said. “In fact, they’re so thick that sometimes you can’t even change lanes because it’s bumper to bumper.”

Anthony Zepeda, from Long Beach, agreed and said he’s worried about the backlog’s effect on the environment.

People “are complaining because of the quality of the air from all of the truckers and freighters that are spewing gas because they run off diesel,” he said.

Zepeda also pointed to a shortage of workers due to an excess of unemployment benefits, he said, that have, some say, kept workers at home.

“A friend of mine said, ‘Why should I work if I can get unemployment?’” he said. “It’s messed up.”

A woman shopping at the Costco in Torrance, who asked to remain anonymous, said she thinks the current backlog will produce even more shortages at stores like she’s seen since the beginning of the pandemic.

“I’ve seen this for the last year and a half of COVID. My girls drink these fruit drinks at Starbucks and they’re always” out of them, she said.

The woman said she was equally exasperated that another item she was looking to buy at Costco wasn’t available for a second time this week.

Angelo and his wife Jamie Martian, who were also shopping at Costco, said they’re planning to stockpile food and necessities for their family of four. Angelo mentioned the recent decline in COVID numbers and wondered why the port is clogged.

“I just don’t understand why there is a backlog,” he said.