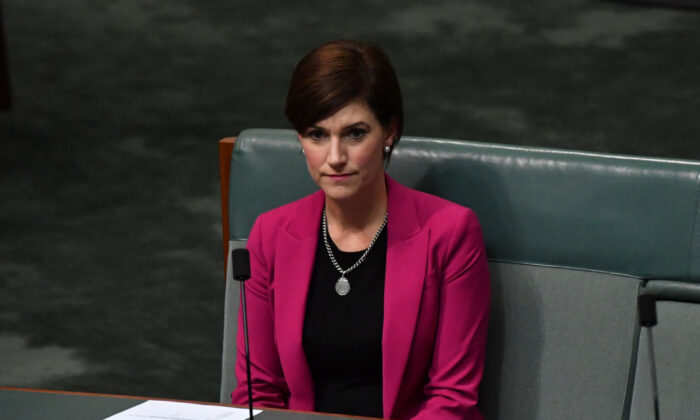 Member for Boothby Nicolle Flint looks on during Question Time in the House of Representatives at Parliament House in Canberra, Australia on March 17, 2021. (Photo by Sam Mooy/Getty Images)
Australia

Federal Member for Boothby, South Australia, Nicolle Flint, is urging the Australian Government to extend proposed legislation which will unmask online trolls and abusers to include additional protections for women.

In a 60-page submission to the Select Committee on Social Media and Online Safety, Flint presented evidence of social media and online abuse of women in public roles and the devastating impact it can have on them, also making recommendations on how improved legislation can provide greater protection.

“It is clear that there is a serious and significant problem with the abuse of women online,” she said in the submission.

“It is well-recognised that such abuse leads to the denigration and abuse of women more broadly, including sexual harassment, sexual assault, and domestic violence.”

Flint gives several examples of women in the public sphere who have suffered online or social media abuse, including Walkley Award-winning ABC journalist Leigh Sales, who has regularly reported on online abuse and has also personally been a victim of it.

For instance, after an ABC interview with Prime Minister Scott Morrison, Sales spoke of hate comments she received, including disgusting sexually-oriented ones.

In the same article, Sales said that ABC’s Lisa Millar was subject to similar abuse on Twitter, and was so bothered by it that she de-activated her account.

Another example is former Nine News sports presenter Erin Molan, who spoke on the 60 Minutes episode titled “Anti-Social Media” of her “vile” experience of online abuse that took her to “some pretty dark places”.

She said that being a sports presenter invited trolls to make comments such as “You’re ugly,” “You belong in the kitchen,” and that she had sexual realtions with colleagues and executives.

Flint, herself, said she was also subject to online attacks before the 2019 federal election, which she noted in a 2019 submission to the Joint Standing Committee on Electoral Matters.

“GetUP, the Unions and the Labor Party ran an aggressive, relentless, and deeply personal campaign against me,” the Liberal MP said.

“I was harassed, faced vile, misogynistic attacks and frequently feared for my personal safety.”

She said these campaigns attacked her using all possible means, including social media and email.

In her more recent submission, Flint highlights that the purpose of the online attacks is to prevent the female victim from participating in public settings, such as democracy and their employment, in order to undermine the woman’s credibility, as well as deter other women from participation in such public settings.

She said that existing laws and voluntary industry practices fail to discourage or prevent this behaviour.

“Overall, there is a need for further legislation to be enacted to protect women, and to reduce sexist, misogynist, and gendered attacks and abuse, which lead to more serious harms to women.”

This comes after the Australian Government announced new proposed legislation on Dec.1 last year that forces social media platforms to disclose the identities of online trolls.

If passed, the new legislation would become one of the world’s most robust online trolling laws and would mean social media companies were considered publishers and held liable for defamatory comments posted on their platforms.

However, the companies can avoid liability if they reveal the identity of individuals accused of defamation. This would allow legal proceedings to commence against the individual responsible for the trolling instead of the company.

Flint states in the submission that while this proposed legislation to unmask trolls and abusers is helpful, the onus is on the victim to pursue the perpetrator.

“Consideration must be given to additional protections for women so that the victims of this behaviour do not bear the brunt of also ending it,” she said.

As part of her recommendations, Flint suggests ammending the Sex Discrimination Act 1984 to increase protections for women, ammending the Criminal Code Act 1995 to do the same, and monitoring the success, or otherwise, of the Online Safety Act 2021 to determine whether it provides real protection to women online, strengthening all provisions if women are still unable to oprerate free of sexist or misogynist abuse in an online or social media environment.

Submissions are now closed and a report from the Select Committee on Social Media and Online Saftey is due to be released on Feb.15.