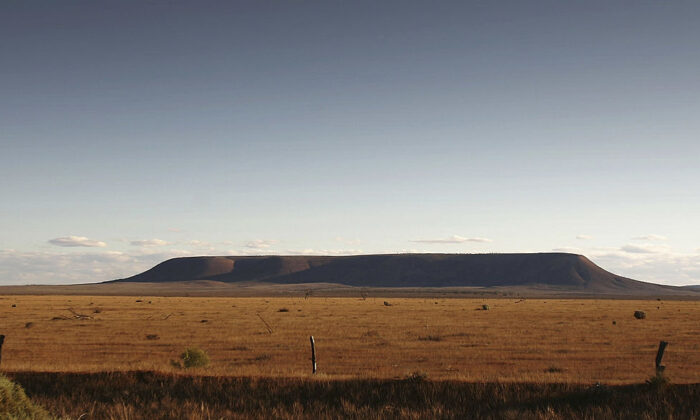 Part of the Flinders Ranges is seen near Port Augusta, South Australia, on June 12, 2005. (Photo by Ian Waldie/Getty Images)
Australia

South Australian (SA) Premier Steven Marshall has announced his government will invest $25 million into nature-based tourism in the state’s regions to attract tourists and create local jobs if he is re-elected in March.

Making the announcement at the Star of Greece restaurant in Port Willunga, around 35km south of Adelaide, and a previous recipient of a Tourism Industry Development Fund grant, Marshall, said that the new Great Outdoors Fund would provide $25 million over the next five years to invest in regional tourism experiences.

As part of the fund, businesses that support and encourage visitors to travel to regional areas and enjoy SA’s parks, rangelands, reservoirs, waterways and marine environments can apply for grants from $20,000 to $1 million to support their projects.

Marshall said that in coming out of the COVID-19 crisis, the SA Government had given a leg up to small businesses, particularly in the tourism sector, so that they could create more jobs.

“A leg up, not a hand out, a leg up and making sure we can do everything we can to support the great regional tourism opportunities across our state,” Marshall said.

When deciding on which businesses will receive grants, among factors being considered are how many short and long-term jobs will be created and whether the businesses can co-contribute to the project.

Marshall gave an example of the grant given to the Star of Greece restaurant as part of a previous and similar government initiative, the Tourism Industry Development Fund.

The SA Government contributed $280,000 towards the restaurant’s development project, while the owners themselves invested more than $1 million.

This comes after Australia opened its international borders on Monday, and states and territories compete to attract tourists.

As part of South Australia’s plan to boost eco-tourism, Marshall said his government would be working with primary industries and regional development, as well as the Department for Environment and Water, to open up the state’s reservoirs, forests, and conservation parks to tourism opportunities.

“We want increased beds in country SA, but we also want great new experiences, so we’re opening it up to broader than we’ve ever opened it up before,” he said.

The Epoch Times reached out to Opposition Leader Peter Malinauskas for comment but had not received a response at the time of publication.

Among Labor’s policies for boosting tourism in South Australia is an $8 million investment in the Adelaide Fringe Festival, aiming to raise its profile on the national and international stage.

While the festival is already the largest arts festival in Australia, if elected in March, a Labor government would support the iconic event to go global.

In addition, Labor would bring back the iconic Adelaide 500, an annual racing event for Supercars which was held on the streets of Adelaide’s east end from 1999 to 2020, as well as reinstate the Adelaide Motorsport Festival, which ceased operating in 2019 after state government sponsorship funds were cut.