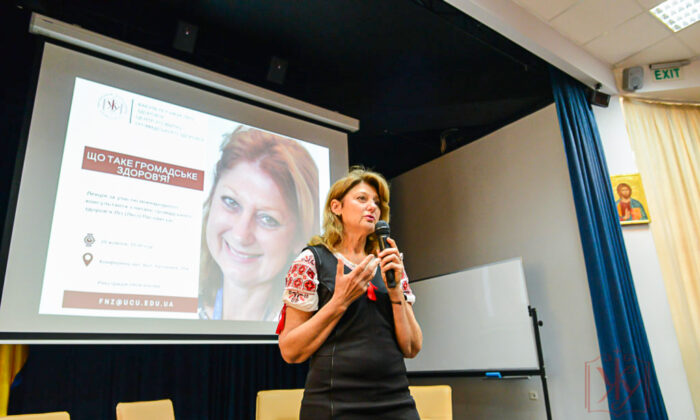 Dr Liz Paslawsky lecturing at the Ukrainian Catholic University in Lviv on "What is public health?" (Provided to The Epoch Times).
Australia

The South Australian (SA) government is donating five pallets of medical supplies to Ukraine to support hospitals and health care workers in their efforts to provide emergency care for wounded civilians.

This comes after Dr Liz Paslawsky from the Australian Federation of Ukrainian Organisations (AFUO)—the umbrella organisation that represents the Ukrainian community in Australia—contacted SA Health to ask for the supplies.

Premier Peter Malinauskas said in a release on Saturday that as a result of the Russian invasion of Ukraine, there are thousands of civilian casualties across the country, with doctors and nurses scrambling to provide emergency care.

“From our safe and peaceful part of the world, we look to Ukraine with horror at what is unfolding. Donating these items is one way South Australians can do their bit to help the Ukrainian people,” he said.

Paslawsky told The Epoch Times that prior to South Australia’s contribution, Victoria, New South Wales, Queensland, Western Australia, and the Australian Capital Territory had also donated medical supplies, with 90 pallets worth having already been sent over.

She said the medical supply list Australia responded to came directly from the Ministry of Health in Ukraine, with large numbers of first-aid kits initially being requested, as the necessity at that time was primarily supporting both civilians and the army fighting out in the field, from where stories emerged of bike tyre inner tubes being used as tourniquets.

However, with all the hospital attention also on treating wounds, regular surgery and procedures had to be put on hold, similar to the situation at the height of the COVID-19 pandemic, whereas now, with the war having moved on to a different location, hospitals have been trying to regroup and cater to the backlog of regular patients.

Therefore, along with first-aid supplies, regular hospital equipment is currently being requested by Ukraine.

Paslawsky also spoke with admiration for the effective supply chain Ukrainians had managed to establish between Australia, Europe, and Ukraine.

She said that Ukrainian people have gone through a range of emotions, and similar to how people felt when COVID-19 first hit Australia, when the war started in Ukraine, people were scared for their loved ones and the vulnerable.

“Then in the first week, Ukrainians could see the Russians’ target was civilians, with homes, schools and hospitals destroyed. Fear turned into anger,” she said.

“As more civilians with no military training, teachers, farmers, bankers, pensioners took up arms, the emotion from all Ukrainians and most people from around the world was and still is how we support them.”

Paslawsky said she threw out the corporate rule book, setting up a supply chain that goes across Australia, through Europe and into the war-stricken areas of Ukraine.

She asked the AFUO for volunteers to help her, and everyday citizens from University students to doctors stepped up, combining with community groups like Rotary across Australia.

Corporate organizations also came on board, but Paslawsky stressed that they are not doing this for publicity, to get customers, or to attract staff.

“Everyone is concerned about cyber attacks. Everyone is involved because they care. This is being replicated across three continents,” she said.

“The result is that we have a fast, robust and agile supply chain that can respond to issues on the ground.”

Paslawsky added that in Ukraine, again a similar supply chain is being used, with ordinary citizens risking their lives to drive supplies directly to the war zone.

“What you don’t see in the TV broadcast is how organised Ukrainians are in using their network to get urgent medical needs to where it is needed most,” she said.