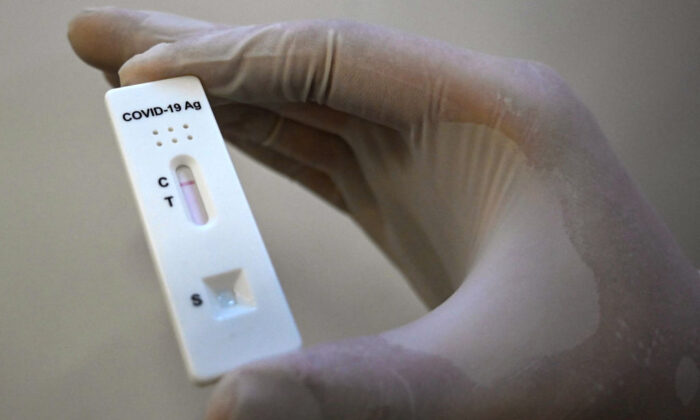 ACCC has announced it will crack down on price-gouging of RATs amid a nationwide shortage. (Natalia Kolesnikova/AFP via Getty Images)
Australia

South Australian Premier Steven Marshall has called for patience as the rollout of COVID-19 rapid antigen tests begins across the state.

The government has lifted a ban on the widespread use of the tests, clearing the way for their sale in pharmacies and supermarkets.

Until now they have only been used in certain sectors, including health care and the mining industry.

“We planned for the use of rapid antigen testing to be implemented when we reached a level of COVID within the community and we have now hit that mark,” Marshall said.

“Rapid antigen testing is a useful tool for surveillance testing and asymptomatic South Australians who are looking for a greater sense of confidence before socially interacting with others.”

The premier said South Australian stores would take time to transport the stock to their shelves and urged people to remain patient over the coming days if they were not immediately available.

However, the state opposition said the pharmacy industry was given no notice of the change and feared a sudden rush on its members with limited or no stocks.

Rapid antigen tests are recommended for people with no symptoms, but who want greater assurance they will not infect people in their family or the community.

The government said they could be used before entering high-risk settings such as nursing homes, before going out where there may be crowds, before going to work, or as reassurance for asymptomatic people feeling anxious or worried in the current COVID climate.

It is also hoped that will reduce demand on the state’s virus testing centres which have been swamped in recent days.

Anyone who tests positive on a rapid antigen test must get a more conclusive PCR test and isolate until they return a negative result.

Their introduction comes after SA’s coronavirus infections more than doubled on Thursday with 484 new cases reported, taking the number of new infections since the state’s borders opened a month ago to 1,307.

Seven people are in hospital with one man in his 30s on a ventilator.

SA now has 1214 active infections, most being managed in home isolation.