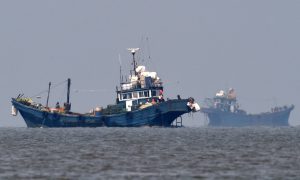 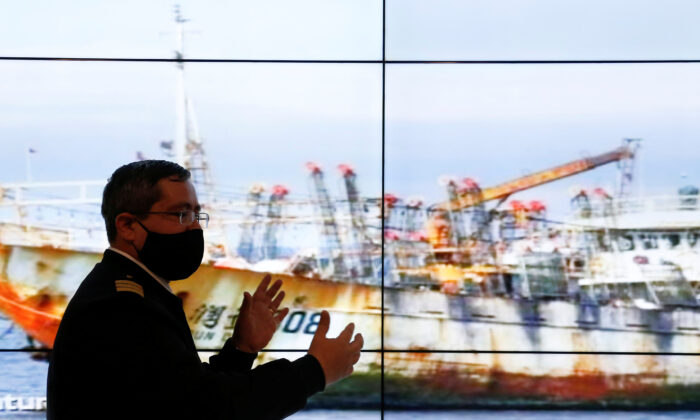 Chile's Commander Rodrigo Lepe, Chief of the fishing department of the maritime territory, shows a ship as a part of a large fleet of Chinese fishing vessels, who Chilean government is keeping tabs, while fishing along the Pacific Coast of South America, in Valparaiso, Chile Oct. 8, 2020. (REUTERS/Rodrigo Garrido)
Chinese Regime

Chile, Colombia, Ecuador, and Peru on Nov. 3 signed a declaration to “take measures to prevent, discourage, and jointly confront” illegal fishing near their exclusive economic zones (around 200 nautical miles from the shore) in the Pacific Ocean, according to a statement by Peru’s foreign ministry.

While China is not named in the joint declaration, the regime has drawn harsh criticism in recent months from governments and environmental groups over its massive fleet of fishing boats stalking the waters in the area.

Over the summer, around 300 Chinese fishing boats were discovered just off the coast of the Galapagos Islands, prompting outrage from Ecuador. The country’s armed forces said that nearly half of the vessels had at some point turned off their tracking systems to evade monitoring of their activities.

The South American countries also said they would improve “cooperation and real-time exchange of information” in relation to illegal fishing.

Beijing in August banned its vessels from fishing off the Galapagos from September to November this year. The flotilla has since moved south in international waters off Peru and Chile.

China, which has the largest fishing fleet in the world by far, was ranked as the world’s worst-performing country in the area of illegal, unreported, and unregulated (IUU) fishing in a 2019 index compiled by Geneva-based nonprofit Global Initiative Against Transnational Organized Crime.

Marine conservation group Oceana in September accused China of “pillaging” the Galapagos primarily for squid, depriving species such as fur seals and hammerhead sharks of an essential part of their diet. The group logged 73,000 hours of fishing from Chinese vessels in just one month from July 13 to Aug. 13 this year.

“This massive and ongoing fishing effort of China’s fleet threatens the Galapagos Islands, the rare species [squid] that only call it home, and everyone that depends on it for food and livelihoods,” Marla Valentine, illegal fishing and transparency analyst at Oceana, said in a statement at the time.

“Sadly, this is just the tip of the iceberg when it comes to the impact of China’s huge distant-water fishing fleet on our oceans,” she added.