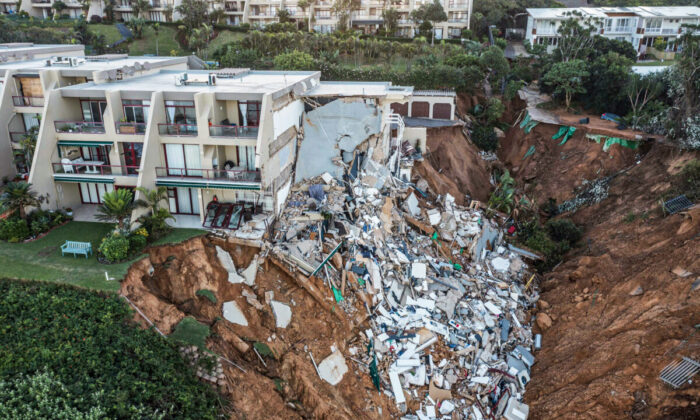 This aerial view shows the destruction at Umdloti beach north of Durban, on April 14, 2022. - Victims of South Africa's deadliest storm on record scrambled to get help on April 14, 2022 as relief teams struggled to cross bridges and roads wrecked by floods and landslides. At least 341 people died when the heaviest rainfall in six decades swept away homes and destroyed infrastructure in the city of Durban and KwaZulu-Natal province. (Photo by MARCO LONGARI / AFP) (Photo by MARCO LONGARI/AFP via Getty Images)
Africa

As floodwaters recede in South Africa to reveal hundreds of bodies and the remnants of lost lives, a picture is emerging of how mismanagement and corruption by the nation’s socialist government contributed to the gravity and depth of one of the nation’s worst natural disasters.

A storm erupted over eastern KwaZulu-Natal province on April 18, dumping almost three-quarters of the country’s entire annual rainfall on the region’s coastal belt within 24 hours. Rain continued for almost a week, causing extensive flooding and mudslides.

Police and the government have confirmed more than 450 deaths, and the toll is expected to rise as scores of people swept away by torrents and buried in mudslides remain missing.

The South African Weather Service says “tragic consequences” were inevitable, given that the downpour was of “cyclonic proportions.”

But provincial government spokesman Lennox Mabaso acknowledges “only a few” of its disaster response teams were “fully activated” ahead of the storm, “because no-one foresaw just how much rain would fall in such a short time.”

Engineers, including some who work closely with the provincial government, have also told the Epoch Times that essential repairs to bridges, roads, and buildings damaged in previous floods hadn’t been done, and municipalities did little to prevent people from building homes on muddy hills and plains.

Many of these people are now dead.

“The floods trapped many people in their houses. Eventually, the floodwaters were so strong that they collapsed the houses, trapping the people,” Candace Grobler, a paramedic in the city of Durban, told The Epoch Times.

“Everything was then washed into the raging rivers, which carried many bodies through gorges and into the sea. We’re now finding these bodies washed up on beaches.”

In the absence of government emergency teams, much of the search-and-rescue and relief effort has been managed by private emergency responders.

In the first five days of flooding, not-for-profit organizations stepped up to feed stricken families, and provide health care and other services.

Mabaso told The Epoch Times it had “done its best.” It wasn’t reasonable, he said, to expect authorities to be prepared for “one of the worst natural disasters in the history of our country.

“We are now rolling out humanitarian aid to tens of thousands of victims. We’ve already given them lots of food, blankets, clothes, medication, toiletries, and a lot more.”

Mabaso added: “Our police and national defense force members are now leading search-and-rescue efforts, and we applaud the work done in this regard in the first days of the floods by the private emergency services and others.”

But even some of the African National Congress (ANC) government’s closest allies are criticizing its slow response to the floods.

“And that’s because some in the ANC give contracts to friends in the private sector who either get paid for not doing the work, or who end up doing substandard work. Government needs to build its own capacity to respond to disasters.”

The ANC, a socialist political party which holds the majority of the seats in South Africa’s National Assembly, has had almost three decades to build this capacity, since it came to power in 1994, according to professor Tshilidzi Marwala, the principal of the University of Johannesburg.

Instead, he says, some in the ruling party have used public funds to enrich themselves, neglecting to equip disaster response teams and failing to build and maintain “proper” infrastructure.

“Take a walk through our cities. There’s rubbish piling up everywhere. What happens to that when the rain comes? It washes into drainage systems and blocks them. So when you have floods, what was going to be a bad impact on people’s lives becomes an even worse impact,” Marwala told The Epoch Times.

“Since we had flooding a few years ago, we did all necessary maintenance,” he said.

He acknowledged, though, that city authorities had been “quite powerless” to prevent people from building houses and shacks on steep hills and in low-lying areas near rivers.

“Thousands of people have moved here from the rural areas over the past few years. If we forcefully move these people, we’re told we’re being inhumane. If we leave them there, we’re told we caused their deaths.”

But urban planning experts, such as Hope Chipungu, of the University of KwaZulu-Natal, say poor infrastructure and planning “undoubtedly” contributed to the scale of the disaster.

“Even mild rains cause floods in some of our cities and towns,” she says. “That’s because infrastructure is old and it must be replaced.”

To help KwaZulu-Natal recover, President Cyril Ramaphosa is releasing a billion rands, almost $70 million, to the provincial government. The same government allegedly stole hundreds of million rands of COVID-19 relief funds, according to a special police task team set up by Ramaphosa to investigate pandemic-related corruption.

Marwala is concerned that the money is “again going to end up in the wrong pockets.”

In a media statement, Ramaphosa said “checks and balances would be put in place to ensure that money made available for relief is not squandered or stolen.”