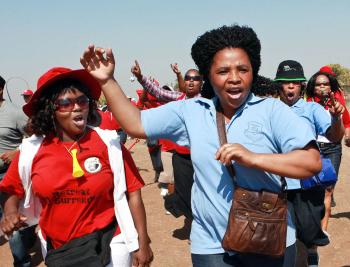 Members of the South African Democratic Teachers Union take to the streets in Inanda township north of the city of Durban. (Rajesh JAntilal/AFP/Getty Images)
Africa

Marco t'Hoen
View profile
Follow
biggersmaller
Print
A majority of government institutions in South Africa were affected by a massive strike by state employees on Wednesday, standing by the union's demands for more pay and rejecting the government's latest offer.

"The strike is on," said Thobile Ntola, president of the South African Democratic Teachers' Union (SADTU) on Tuesday, the South African Mail and Guardian reported.  SADTU is part of the COSATU affiliated unions, which rejected the latest government offer.

Ntola said the strike will continue until the “employer accedes to the demands of the workers.“ The unions expected 95 percent of the 1.3 million public servants to join the strike.

Within the nine provinces, schools, police, courts, and hospitals were all affected as workers either stayed away from work, operated at minimal capacity, or joined the picket lines.

The unions are demanding an 8.6 percent wage increase and a 1,000 rand (US$137) monthly housing allowance. In the negotiating process last week, the government increased its offer to 700 rand for housing and a 7 percent wage rise.

The current offer, he said, costs an extra 5 billion rand (US$680 million), the Mail and Guardian reported. While other unions will join the strike on Thursday, Baloyi expressed his hope that negotiators will reach an understanding before then.

"You can't push and demand your rights at the expense of the rights of others," he said in Business Day.