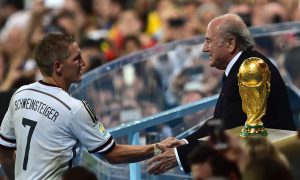 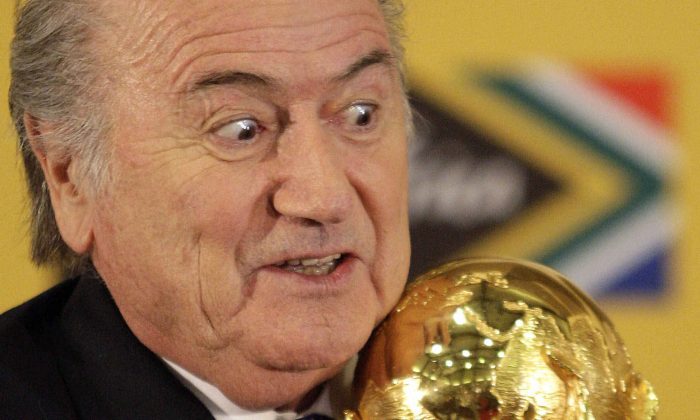 In this Sunday June 6, 2010 file photo FIFA President Joseph Blatter holds the trophy after receiving it back from South African President Jacob Zuma during a media briefing on the 2010 Soccer World Cup in Pretoria, South Africa. (AP Photo/Themba Hadebe,)
International

Anton Alberts of the Freedom Front Plus said the information his party received claimed a previous investigation into “irregular” payments around the World Cup bid was stopped by “high-level interference.”

“It (the information) does tell us of an event that took place and an investigation that was stunted from a political level,” said Alberts, an opposition member of parliament.

The South African investigation comes after the U.S. Department of Justice last week indicted 14 people on corruption charges related to soccer. Seven of them were arrested in Zurich ahead of the FIFA congress and are awaiting extradition.

In a separate investigation, Swiss authorities are looking into the 2018 and 2022 World Cup bidding process.

The crisis, the worst in FIFA’s 111-year history, has led to the resignation of President Sepp Blatter, who had won a fifth, four-year term two days after the arrests. The 79-year-old Blatter has not yet been officially implicated in either investigation.

Russia won the right to host the 2018 World Cup and Qatar was awarded the 2022 tournament. Australia, one of the losing bidders for the 2022 World Cup, launched its own investigation Thursday into corruption claims surrounding its failed bid.

In Johannesburg, documents were being handed over to the Directorate for Priority Crime Investigation unit and needed to be investigated fully, Alberts said.

“The information is quite raw,” the lawmaker said, adding people were “coming out of the woodwork” with information now that a wider U.S. Department of Justice probe into corruption at FIFA was underway.

The South African crime unit’s spokesman, Brigadier Hangwani Mulaudzi, told The Associated Press that a file had been opened and the unit would decide whether the documents provided by the Freedom Front Plus called for a full investigation.

“There are investigators looking into the matter,” Mulaudzi said.

Mulaudzi would not describe the contents of the documents. In a statement, his unit said they concerned “the FIFA issues.”

In the Justice Department’s indictment, senior South African bid officials and the government were accused of channeling $10 million through FIFA to some of its top executives as bribes for them backing the country’s bid to host the 2010 World Cup, the first in Africa.

One of the FIFA officials, Chuck Blazer, admitted in court documents unsealed on Wednesday in the U.S. to receiving bribes around the vote that gave the World Cup to South Africa.

South Africa won the 2004 vote 14-10 over Morocco, which was also accused of trying to bribe voters.

The South African government has denied involvement in any bribes, and said the $10 million was an “above-board payment” given to former FIFA vice president Jack Warner to help soccer development in his Caribbean region.

Instead, Warner and Blazer, both former FIFA executive committee members, shared the money, the Justice Department says. Another FIFA official from South America is also implicated in bribes for voting for South Africa.

Warner is one of the 14 indicted officials in the U.S. investigation, which appears to stem from Blazer’s guilty plea in 2013 to racketeering and other charges.

Former South African president Thabo Mbeki also denied any knowledge of any bribes when he was in office during the bid process.

Alberts said he also had information on other supposed improper payments connected to South Africa’s World Cup bid “above and beyond” the $10 million that went to Warner and Blazer.

So far there has been no contact between South Africa’s crime unit, known as the Hawks, and the FBI, but Mulaudzi said South African investigators were willing to work with the Americans if required.

No specific officials were yet being investigated, Mulaudzi added, denying reports that current South African soccer head and 2010 World Cup organizer Danny Jordaan was implicated in the bribery allegations.