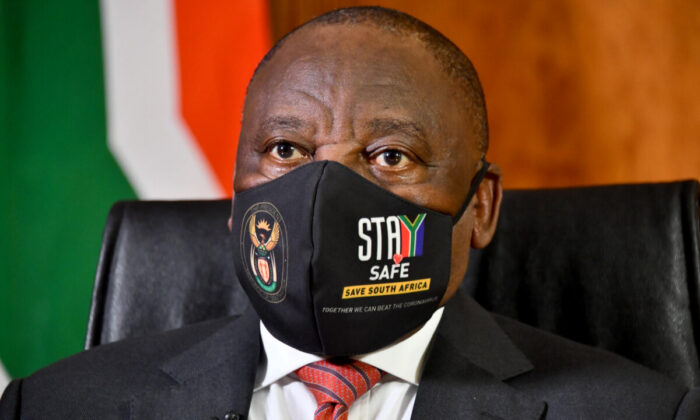 South African President Cyril Ramaphosa has said the travel ban on his country and others because of the Omicron variant is "discriminatory" and "unscientific." (GCIS)
Africa

JOHANNESBURG—South African President Cyril Ramaphosa has denounced travel bans on Southern African nations linked to the new COVID-19 variant and has called for an end to the “discriminatory” and “unscientific” restrictions.

South African scientists revealed on Nov. 25 that they had detected a new, potentially more infectious variant now known as “Omicron.” They tracked the first case to neighboring Botswana and now suspect that Omicron is driving a new wave of infections in South Africa’s Gauteng province, which includes the country’s most populous city, Johannesburg.

Countries around the world responded by stopping travel to and from southern Africa, while scientists establish if the new variant is more transmissible, if it results in more serious illness, and how susceptible it is to current vaccines.

British Prime Minister Boris Johnson said the travel restrictions are necessary to prevent as much entry of Omicron into the UK as possible and to delay outbreaks of the new variant, so that his health authorities have more time to study it and prepare for its inevitable spread.

The Biden administration announced on Nov. 26 that it would prohibit travelers from South Africa, Botswana, Eswatini, Lesotho, Malawi, Mozambique, Namibia, and Zimbabwe from entering the United States. It stated that the travel ban won’t apply to U.S. citizens or lawful permanent residents, who will be required to present a negative COVID-19 test before returning to the United States.

In a televised address to South Africans on the evening of Nov. 28, Ramaphosa said the travel bans are “deeply disappointing.”

“This is a clear and completely unjustified departure from the commitment that many of these countries made at the meeting of the G-20 countries in Rome last month,” he said.

Ramaphosa noted that the G-20 nations, including the United States and the UK, had pledged to follow the guidelines of the World Health Organization (WHO) with regard to international travel during the pandemic.

The WHO has classified Omicron as a “variant of concern,” indicating that it may be more infectious, cause severe disease, and lower the effectiveness of vaccines. But it’s opposed to travel bans as a strategy against Omicron and other variants.

“These restrictions are completely unjustified and unfairly discriminate against our country and our Southern African sister countries,” he said. “The prohibition of travel is not informed by science, nor will it be effective in preventing the spread of this variant. The only thing the prohibition on travel will do is to further damage the economies of the affected countries and undermine their ability to respond to and recover from the pandemic.”

“South Africa detected the variant because it has some of the best genetic sequencers in the world, working in one of the best sequencing labs in the world, and they spend every day searching for new mutations,” van den Heever said. “They found this variant amazingly fast. So, just because a variant is detected here doesn’t mean it originated here.”

Genetic sequencer Tulio de Oliveira and his team of the KwaZulu-Natal Research Innovation and Sequencing Platform were also the first to find the Beta variant in October 2020, which has since spread around the world.

The UK restrictions on South Africa have resulted in 300,000 British citizens canceling plans to visit the country over the next month. Tshivhengwa said this was “another devastating blow” to an economy reeling from the fallout from the pandemic, which has already resulted in 2 million lost jobs, according to the government.

The country’s official unemployment rate is one of the highest in the world at 35 percent.

While most people in developed countries have been immunized, the WHO has stated that only 7 percent of Africans have received a single dose of vaccine.

Fatima Hassan, an attorney for the Johannesburg-based Health Justice Initiative, is spearheading African efforts to get equal access to COVID-19 vaccines.

More than 100 low-income countries are asking the World Trade Organization to waive the intellectual property (IP) rights of vaccine manufacturers so that “recipes” for the vaccines can be shared, and they can be made and distributed around the globe. They say that this will end the pandemic.

But, as activists and human rights organizations battle to get more vaccines into Africa, much of the continent, including South Africa, the African country most badly affected by the pandemic thus far with almost 3 million infections and 90,000 deaths, doesn’t appear to want the vaccine.

South African Department of Health officials have confirmed to The Epoch Times that only 35 percent of the country’s population of 60 million people are fully vaccinated. The government’s target to immunize 60 percent by the end of 2021 is fast becoming impossible to achieve.

South Africa, like the rest of the continent, once struggled to get COVID-19 vaccines, but is now stuck with too many, given the slow rate of vaccinations. Officials say that the country currently has almost 17 million doses on hand.

“But the people aren’t coming for them,” one official said. “We’re now asking pharmaceutical companies to delay deliveries of jabs, probably ’til early next year, while we try to clear stock.”

South African Department of Health Deputy Director-General Dr. Nicholas Crisp, who also serves as the coordinator of South Africa’s vaccine rollout, said vaccination numbers had “slowed,” which was “very concerning.” Over the past two weeks, his officials have only been able to administer an average of 106,000 doses per day.

“We should be doing 250,000 a day,” Crisp told The Epoch Times. “We have the vaccines, we have the capacity to vaccinate, we have mass vaccination sites, we have public and private facilities vaccinating. … But they’re all reporting that they’re not full, and they could be seeing a lot more people.”

Crisp said several factors are hampering the vaccination drive, including the “aftershocks” of a period from about a month ago when pharmaceutical firms failed to deliver promised vaccines.

“We lost momentum in the week that we didn’t have vaccine at all clinics, and it was irritating for people to get to sites and then be turned away. Some of those frustrated individuals haven’t returned,” he said. “Then you have to factor in a bit of vaccination fatigue. We’re out of the third wave and people have relaxed their guard. I also think there’s some hesitancy; people wait and see. There’s a lot of noise by anti-vaxxers who can’t see the obvious evidence that vaccines save lives.”

Charismatic Christianity is strong in South Africa, and many Evangelicals are resisting the vaccine.

High-profile vaccination refusers include former Chief Justice Mogoeng Mogoeng, who believes that the vaccines are a “conspiracy” to “inject the Number of the Beast” into the global population, and Kenneth Meshoe, the leader of the African Christian Democratic Party, who has consistently refused the vaccine.

“We would like to appeal to the public: Look at the facts,” Crisp said. “Consider the testimonies of the many people telling us about their personal experiences in the hospital, and of friends and family of theirs who were not vaccinated and who died. We know that vaccines save lives. There’s sufficient data on that.

“We also know that the vaccines are like any other vaccine and do have side-effects. We do know that adverse events are reported. But the numbers of adverse events that happen are minute compared with the complications that we’re seeing from COVID infection.”

Several sources in the Ramaphosa administration have told The Epoch Times that the government is going to introduce “emergency legislation” declaring vaccinations mandatory “within weeks.”