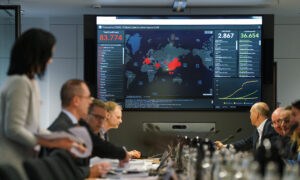 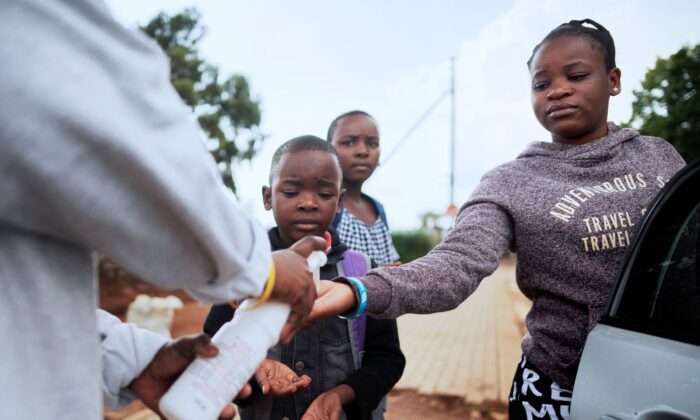 An International Red Cross member gives hand sanitiser to a resident as they provide health-care prevention advice to try contain the COVID-19 Coronavirus outbreak, in the Protea informal settlement in Soweto, on March 23, 2020. (Luca Sola/AFP via Getty Images)
WORLD

South Africa’s confirmed CCP virus cases jumped to 402 on Monday, an increase of 128 from the day before.

South Africa, which had reported an increase of 34 on Sunday, has the highest number of cases in Africa.

Department of Health Minister Zweli Mkhize said, in confirming the new cases, “it is notable” that the Northern Cape confirmed its first cases.

Most of the cases are in Gauteng Province, while Western Cape has reported 100 cases and KwaZulu-Natal has recorded 60 cases.

The government hasn’t released the hospitalization rate, or the percentage of patients who require hospital care. The rate differs from country to country but has typically been between 15 and 20 percent.

South African President MC Ramaphosa was slated to address his nation later Monday “on measures to be undertaken to mitigate the impact of COVID-19,” Mkhize said.

The new illness mostly affects the elderly and people with other health conditions, but can also cause severe symptoms, even death, in other groups.

Wuhan, China saw the first cases in the world last year before the virus spread to other countries. The worldwide death toll is 15,374 as of Monday, though the Chinese Communist Party’s case and death count are manipulated, and a number of experts believe the same of figures from Iran.

No other African country has over 67 confirmed cases.