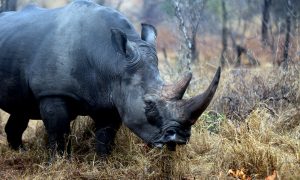 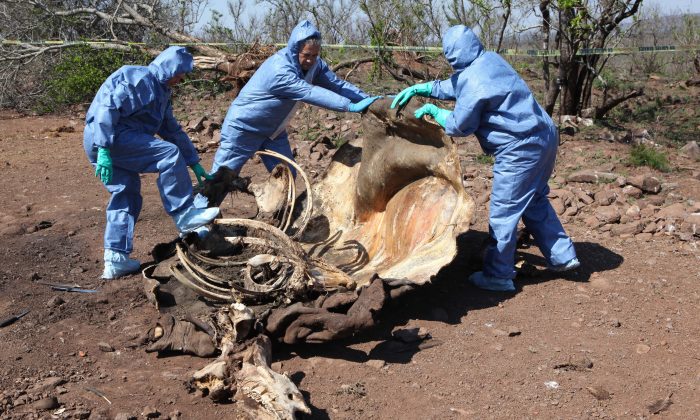 Investigators open the decomposed corpse of a poached rhino in search of forensic evidence, on the border with neighboring Mozambique near Skukuza, South Africa, on Nov. 20, 2014. South African officials said Thursday, Jan. 22, 2015, a record 1,215 rhinos were poached in 2014, a 21 percent increase over the previous year. (AP Photo/Denis Farrell)
Africa

JOHANNESBURG—A record 1,215 rhinos were poached in South Africa in 2014, the latest grim statistic in an increasingly desperate struggle to stem a surge in the killing of rhinos for their horns, officials said Thursday.

Edna Molewa, South Africa’s environment minister, said the toll represented a 21 percent increase over the previous year. South Africa is home to most of the world’s rhinos.

International criminal syndicates are said to be involved in poaching rhinos, whose horn is worth a fortune on the illegal market in parts of Asia. Some Vietnamese and Chinese view the horn as a status symbol and a healing agent, despite a lack of evidence that it can cure. Rhino horn is made of keratin, a protein also found in human fingernails.

A wildlife trade monitoring network said the rhino poaching crisis is getting worse despite increased support for efforts to save the animals, including more rangers on the ground.