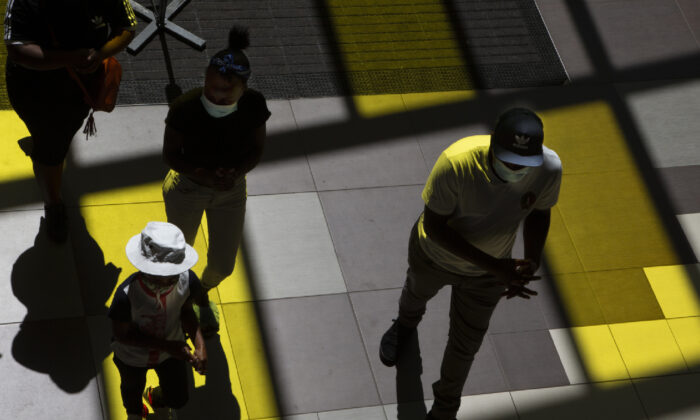 Shoppers wearing face masks to protect against COVID-19, enter a shopping Mall in Johannesburg, Sunday, Nov. 8, 2020. In an address to the nation on Nov. 11, 2020, (Denis Farrell/AP)
Africa

JOHANNESBURG —South Africa is opening up international travel to visitors from all countries in an effort to revive its tourism and hospitality industries, President Cyril Ramaphosa announced.

Foreign visitors will be admitted providing they produce negative COVID-19 test results, Ramaphosa said in a broadcast address on the night of Nov. 11.

This step, making South Africa one of the world’s countries most open to international travel, comes as cases of the disease are slowly increasing in the country. Ramaphosa said his government will closely monitor any signs that international visitors increase transmission rates.

“By using rapid tests and strict monitoring we intend to limit the spread of the infection through importation,” Ramaphosa said. “We expect that these measures will greatly assist businesses in the tourism and hospitality sectors.”

After closing its borders as part of one of the world’s strictest lockdowns imposed at the end of March, South Africa has gradually reopened, resuming international flights on Oct. 1 but not admitting travelers from countries with high infection levels. Now, that restriction has been removed, Ramaphosa said.

With a cumulative total of more than 740,000 confirmed cases of COVID-19, including just over 20,000 deaths, South Africa has nearly 40 percent of Africa’s total number of more than 1.9 million reported cases, including 46,272 deaths, according to the Africa Centers for Disease Control and Prevention. South Africa, with a population of 60 million people, has reported a disproportionately high level of cases for the continent of 1.3 billion in 54 countries.

At its first peak of COVID-19 in late July, most of South Africa’s hospitals succeeded in coping with patients. Hospitalizations and deaths dropped in August and September but in recent weeks, cases have begun to climb.

South Africa’s upward creep is part of an increase across the continent. Africa’s top public health official said the continent has seen an average 8 percent rise in new coronavirus cases over the past month.

“We expected it to happen,” John Nkengasong, director of the Africa CDC, said on Nov. 12, warning that when the virus comes back for a second wave, “it seems to come back with a lot of full force.”

The African continent is “at a critical point in the response,” he said, again urging governments and citizens to follow public health measures. Testing across Africa remains a challenge, with 19 million tests conducted so far. Countries with the highest increase of cases in the past week include Congo at 37 percent, Kenya at 34 percent, and Nigeria at 17 percent.

In South Africa, Ramaphosa warned that citizens must remain vigilant to try to prevent a fresh resurgence of the disease, warning that the Eastern Cape province is experiencing a worrying increase. The number of new cases in the province has risen 50 percent in the past week and the total number of new cases in the last 14 days is around 145 percent higher than the previous 14 days, he said.

The president announced that South Africa has extended the country’s current COVID-19 restrictions, requiring people to wear masks in all public places, businesses, and stores to keep people distanced and a nighttime curfew from midnight to 4 a.m. In one relaxation, liquor sales can now resume at ordinary trading hours.

Ramaphosa said that the country was looking to secure a significant supply of COVID-19 vaccines when tests show they are effective and safe.

“South Africa is collaborating with several multinational pharmaceutical companies to obtain a safe and effective vaccine for our people and is contributing towards the availability of the vaccine in the rest of the continent,” he said. “We are working through the African Centers for Disease Control and Prevention to acquire and fund a vaccine for the African continent. It is estimated that Africa will need around $12 billion and 750 million doses of an effective vaccine.”

Last week, South African pharmaceutical firm Aspen Pharmacare announced a deal with Johnson & Johnson to manufacture its COVID-19 vaccine candidate, if it’s approved in South Africa and internationally. Aspen said that it would have a capacity to produce 300 million doses of the vaccine.

The COVID-19 outbreak has taken a toll on South Africa’s economy since the lockdown was imposed in March. South Africa lost up to 2.2 million jobs in the second quarter of the year, taking the unemployment rate to a record high of 42 percent, according to official statistics.

Africa’s most developed country slipped further into recession in the second quarter, contracting by 51 percent. Its economy is expected to shrink by up to 8.2 percent for the year, its central bank announced in October.