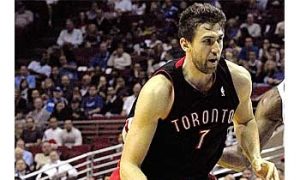 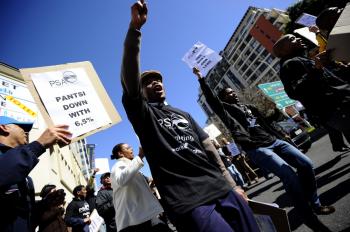 Dozens of public workers demonstrate on August 19, 2010 during their lunch break in support of the ongoing general strike in the Cape Town CBD in Cape Town, South Africa. (Gianluigi Guercia/AFP/Getty Images)
Africa

Marco t'Hoen
View profile
Follow
biggersmaller
Print
Several medical facilities including three hospitals were shut down Thursday as over a million government workers flooded the streets of Johannesburg, South Africa, during a second day of protests over government proposed wage increase, according to allAfrica.com.

Protesters blocked entrances and stormed inside some facilities. Police fired rubber bullets and used a water cannon to disperse a crowd in front of one hospital but no injuries were reported, according to AfricaNews.com.

"When they refused to move, minimum force had to be used. So rubber bullets were fired," said police spokeswoman Capt. Nondumiso Mpantsha, according to the report.

Patient care has been greatly affected and military doctors and nurses have been called to assist in the hospitals, according to various media.