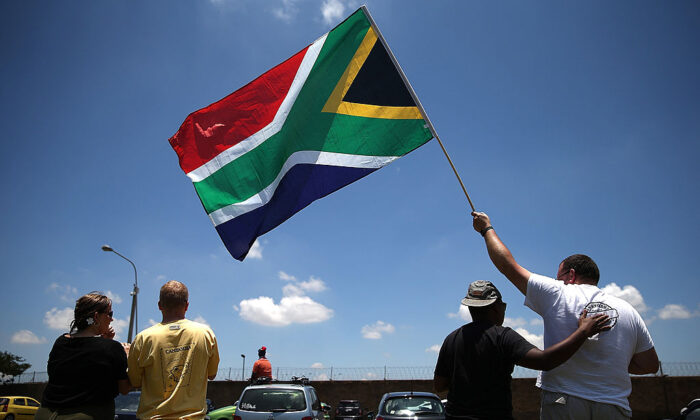 People wait alongside the road to see a military plane take off from Waterkloof military airbase that is carrying the casket of former South African President Nelson Mandela in Pretoria, South Africa, on Dec. 14, 2013. (Justin Sullivan/Getty Images)
Viewpoints

Municipal and local government elections across the “Rainbow nation” will be running soon, on November 1, and they will serve as a litmus test for the four main political parties on how they may perform at the next national election.

The 2021 elections have generated much debate on the shocking state of South African municipal governance and have put a spotlight on the corruption destroying the delivery of essential services.

This has, in turn, led to a debate on how 27 years of rule under the African National Congress (ANC)-led coalition (along with the South African Communist Party and the Congress of South African Trade Unions) has delivered the “liberation” promised with the accession of Nelson Mandela.

Two questions are worth asking.

First, how did the municipalities become so broken despite the ANC inheriting well run government systems and utilities?

Second, what negative impacts have South Africans suffered due to the widespread collapse of governance in recent decades?

While all levels of South African government have been undermined by maladministration, corruption, and affirmative action policies, the worst damage has occurred at the municipal level, which has seen failures in the performance of water and sewerage systems, electricity blackouts, and potholed roads.

Part of this collapse can be traced back to the ANC’s affirmative action policies, including quota systems for black Africans.

Due to a lack of skilled and experienced blacks, many poor quality appointments were made. The skills crisis has been so severe in the municipal and health sectors that the national government arranged for Cuban engineers to be sent to help restore services.

However, the problems with affirmative action were exacerbated by the ANC’s “cadre deployment” policy, which saw the ruling party run a system where ANC coalition members were deployed to all levels of government and the economy.

“Cadre deployment” was learned by ANC members while they were in exile in Stalinist Eastern Europe. By mixing American-style affirmative action with Stalinist cadre deployment, the ANC created an enormous party-linked patronage system that today encourages black South Africans to join the ANC first before they find a job.

To make matters worse, affirmative action and cadre deployment pushed competent people out of employment and subsequently out of the country—with South Africa losing those skills forever.

Ultimately, this set in motion a downward spiral of productivity in both the government and private sector.

Cadre deployment also nurtured a culture of corruption. This is because party hacks developed a Marxist-style belief that the success of white South Africans was not due to hard work or skill, but rather due to the exploitation of another class—in this case, blacks, who believed whites were guilty of “stealing the land.”

Thus did the beneficiaries of affirmative action and cadre deployment convince themselves that it was now their “turn to eat.” Once they bought into the ANC narrative that whites were beneficiaries of “theft,” they were, in turn, justified to do the same. As a result, it created a curious sense of entitlement that has translated into an ever-spreading cancer of corruption, fraud, and misappropriation of funds.

Once ANC comrades decided they were entitled to grab wealth through all means possible, there was no stopping them. Indeed, those at the top-end of the cadre deployment tree are now colloquially known as the “Gucci comrades.”

So how has the widespread collapse of municipal governance impacted the lives of South Africans?

Most of us take for granted the work of local government, not recognising how much we rely on them to deliver clean water and a working sewerage system. Only when sewage or waste disposal systems fail do we understand how dangerous it can be for a population.

In some districts, sewage is now routinely poured into the rivers and dams, creating huge health risks. One example is the Vaal Dam, the main water supply for 19 million South Africans living in the Johannesburg-Pretoria megalopolis, which has now become polluted due to the continual inflow of untreated sewage from upstream municipalities.

If living with substandard water and sewerage systems is not bad enough, South Africans must also deal with a failing electricity system—sparked by two issues.

One is that government coffers are practically empty due to continuous looting from corrupt employees, resulting in slow payments to state-owned electricity provider Eskom (which is also rife with corruption), and has seen the state-owned enterprise cut-off power to some regions.

Another phenomenon is “izinyoka-nyoka,” where individuals illegally siphon off electricity, which has resulted in millions of dollars of power being consumed but not paid for.

But due to ineffective governance and poor policing, electricity theft is now unlikely to be stamped out.

Some South Africans—who have little faith in the electoral system—have taken matters into their own hands. Civil-rights group, Afriforum, has set up local action groups to fix the roads and pavement, organise rubbish removal, and restore water and sewerage services. The group is also turning to legal action against underperforming governments, which will undoubtedly be an enormous undertaking.

So at the end of the day, will upcoming municipal and local elections bring renewal and a new crop of politicians to fix these problems?

Past experience suggests no.

Instead, the ANC will spend much of the election campaign apologising for its past performance and promise the world it will do better next time.

Declining voter turnout (due to disillusionment) and the fact South Africans tend to vote along racial lines will very likely deliver a continuation of the current system, even if it teems with untold levels of corruption.

And predictably, when it becomes obvious nothing has improved after the elections, a new round of unrest—called “service delivery protests”—will break out against the ANC’s failure to deliver on its promises.

But this political theatre will change nothing. The cycle will simply continue with the corrupt enriching themselves; voters continuing their wait in vain for promised improvements; and the once shining beacons of African progress descending towards a future resembling other sprawling, dysfunctional cities on the continent.